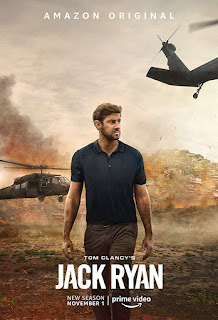 Our own desk analyst, Steve Taylor-Bryant, jumped back into the action and binge watched Season 2 of Tom Clancy's Jack Ryan on Amazon Prime...

I really enjoyed season 1 on Amazon Prime last year [read Steve's review of Season 1 here - Ed] and waited very impatiently for season 2 to drop. Now that it has, I haven’t slept and am very tired, but it was totally worth it.

We start with a missile or rocket being launched in the South China Sea. Deputy Head of Station, Moscow, James Greer (Wendell Pierce) starts to investigate Russian involvement which leads to a container ship berthed in Venezuela. Now suffering a heart condition and not enjoying life in the Russian capital, Greer engineers a move to Venezuela so he can investigate further. Back in Washington D.C. Jack Ryan (John Krasinski) now works for Senators in the House and has come across information that he thinks leads to illegal weapons being sold to Venezuelan President Nicolas Reyes (Jordi Molla). He leads a Senate investigation to Venezuela with long-time friend and ex-Marine boss Senator Moreno (Benito Martinez) where he happens upon his ex-boss Greer and his new commander and Chief of Station Mike November (Michael Kelly), the ex-husband of U.S. ambassador Lisa Calabrese (Susan Misner). Reyes and his loyal number two Miguel Ubarri (Francisco Denis) have their own problems. Not only are the United States now investigating them, they are facing competition in the upcoming Presidential election from pro-democracy liberal Gloria Bonaldi (Cristina Umana) the wife of the missing Minister of the Interior thought assassinated by Reyes. I can't really say anymore without giving away massive plot secrets and I am doing my very best to keep this relatively spoiler free but expect jungle warfare, international politics, financial analysis of course. Also you’ll see an ex-BND agent turned assassin for hire, Max Schenkel (Tom Wlaschiha), current BND agent Harriet Baumann (Noomi Rapace), and a slew of actors that you know from other things and will brighten up your viewing experience by their inclusion.

The best part of season 2 is again the writing. I like the Jack Ryan movies, all of them are pretty good, but none of them are given the time that a miniseries can offer to expand on things. The films have to get to an explosion pretty quickly, then keep the action flowing right up until the end but real life isn’t like that and the team behind Tom Clancy’s Jack Ryan use every moment of the season’s 7 odd hour runtime majestically. There is no padding; every moment, be that an action sequence or a quiet chat in an office, is vital and relevant and that is a tough nut to crack in television writing. Aside from the stellar cast performances there are also the glamorous and not so glamorous locations that are beautifully shot and wonderfully utilised, and a cinematic style score from composer Ramin Djawadi (Game of Thrones) that settles you or ramps up your own internal tension with ease.

As with season 1, Wendell Pierce is a delight, sassy, serious, wisecracking, smart, all the tropes you would want from a character like Greer, and Krasinski as Jack Ryan just goes from strength to strength. Noomi Rapace was a revelation, I wasn’t expecting her casting and she is another that wastes none of her screen time and the chemistry her character has with Ryan is spot on. Michael Kelly I always enjoy in things but, as Mike November, he gets the chance for a little more banter style humour than he’s usually afforded and comes across as a really funny guy who often gives you as a viewer the light relief you need after some tense action scene.

Tom Clancy’s Jack Ryan is a stunning show and the second season is as good as that spectacular debut year if not better. Had it not been for Chernobyl then this would most definitely have been my show of the year.