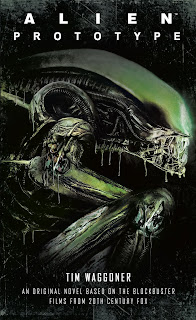 Mad scientist gains access to Xenomorph egg, it hatches, and all hell breaks loose as people are killed. Of course, it's been done before: the whole of the Weyland-Yutani Corporation seems intent on breeding these monstrous aliens and deploying them for warfare. However, it is Venture, a rival company, that wishes to obtain the Holy Grail of alien artefacts in this fun story penned by Tim Waggoner and published by Titan Books.

I've never been one to dive into the various graphic novels of the Alien Universe so it's not easy to keep up with the various characters created over the years. Does having some prior knowledge of comics help with Alien Prototype? Not really, I found it easy to get straight in and read. It probably does help that I had some knowledge of Zula Hendricks, a friend to Amanda Ripley-McClaren, thanks to the publication of Alien Isolation (read Alwyn's review of that book here), but it's not a problem for new readers.

Spy Tamar Prather infiltrates a group of space pirates to locate a Xenomorph egg, also called the Ovomorph. The outlaws eventually board a commercial transport where an egg is found. Prather's job now is to abandon her pirate associates and deliver the egg to her client, Dr. Gagnon of Venture, at The Lodge, a facility on the planet Jericho 3. Reminiscent of that scene in Jean-Pierre Jeunet's Alien Resurrection (1997) where kidnapped Humans are used as hosts for Xenomorphs by military scientists, Gagnon tricks a male colonist to be part of some medical research. Hassan, the colonist, has given his time before with various experiments - this time he unwittingly becomes part of something that won't just end his life, but will have the potential to cause unspeakable horror. In a test chamber the colonist is faced with an egg and the Facehugger within.

At this present time, former marine Zula Hendricks is on the colony training potential members for Venture's Colony Protection Force. She's a very likeable character and one that is given enough to do throughout the story. With the alien breaking free of the test chamber and growing to become a thoroughly perfect killer, Hendricks and her team are quite literally the only ones that have any chance of standing up against the Xenomorph. To complicate matters, however, is the knowledge that the creature is a carrier of cellular necrosis, a deadly disease passed on from its host Hassan. Ingeniously this particular alien is able to adapt and use it as an extra weapon, infecting Humans in its path and causing the disease to spread virally through the colony.

Tamar is a fun character, a mercenary whose objectives can change in an instant, depending on who's paying and whether someone else can afford more. She's a survivor, a realist, and emotionally detached from those around her.

Award-winner Tim Waggoner was a great choice to pen an Alien story. Not one new to media tie-ins, he crafts something that, in my opinion, is easily one of the best takes on the Alien franchise in years. If a single Xenomorph (Gagnon christens his a "Necromorph") is more than enough to become your worst nightmare, then why not add a pathogen to escalate the tension further...

Titan Books is easily on a winner.