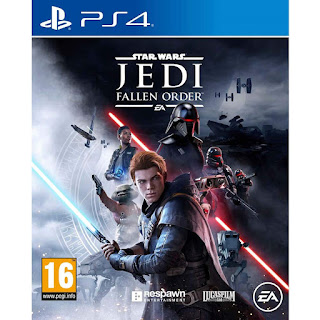 While waiting for the new film to come out, Kraig Taylor-Bryant feeds his Star Wars craving by playing Star Wars Jedi: Fallen Order...

Star Wars Jedi: Fallen Order, debatably the first offline story driven non-Lego Star Wars game given to both Star Wars fans and gamers since 2012’s “Kinect Star Wars” (which was a bit iffy with its choice of implementing a “let’s dance” style game mode). Regardless we have one now, and suffice to say that it's exploded, which we can only hope teaches EA (the financial conglomerate in charge of Star Wars games) that gamers still have a keen interest in story driven games, despite their previous statements (and the success of recent story games like God of War).

Anyways, this game, in a nutshell, is absolutely fantastic. I could compliment the effort that went into this game by Respawn Entertainment (a subsidiary games company under the EA banner for this project) all day. The music itself is absolutely phenomenal, getting me excited enough to load up the game just to hear the tragic yet hopeful tones that accompany the menu theme tune.

It wasn’t just the music that helped to make me as a player feel as if I was a part of this era of the Star Wars universe, it was also the many references/"easter eggs" hidden within the game that helped to both link these trilogies together, and bring back some nostalgic memories of watching the films. The game includes references to characters in the TV shows (however the game provides enough information through the scanning system if you haven’t seen the shows) as well as even references to meme material like “the high ground” and a familiar face from the standalone film Star Wars Rogue One. It was little nods like that which really shows the attention to detail that went into the game.

For those that don’t know, Fallen Order tells the story of Cal Kestis, a Jedi survivor of the lethal Order 66 to kill all Jedi (sent out to all clones to be the newly “elected” Emperor Palpatine). Cal must “find his destiny” in this newly perilous galaxy, meeting friends along the way, such as ex- Jedi Cere Junda and gambler/pilot/cook Greez Dritus. The player is immediately thrown into the story with ties to a familiar galaxy, whilst maintaining this new one, with links to both the prequel trilogy and the original trilogy, which help to bridge the gap between them. Essentially Cal and his friends intend on bringing back the Jedi order, whilst being chased/hunted by the emperor’s “inquisitors” (ex-Jedi turned to the dark side). 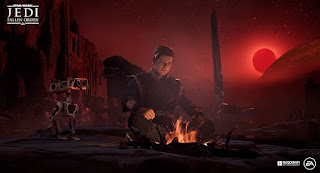 When it comes down to the main cast, Cal (acted in motion capture by Cameron Monaghan), Cere (Debra Wilson), Greez (Daniel Roebuck) and Trilla the “second sister inquisitor” (Elizabeth Grullon) the characters are all three dimensional, giving us backstory and motive between each and every one of them. We learn of Cal’s past through rich flashbacks, detailing his days as a Jedi padawan, and hear snippets of stories from Cere, Greez and even Trilla’s past. Cal’s pet droid BD-1 even has a fun quirky personality behind him that fits well with the cowardly seriousness of Greez, leaving a fun dynamic between the whole crew.

The customisation also plays a huge role in having the player immersed in the game, with its option to customise the character appearance, their droid’s appearance, the ship’s appearance and the design of their lightsaber. The customisation in the costume and droid however, felt a little lacklustre. I understand that as a player, the poncho designs for the main character are meant to give off the idea of being discreet, and not making it obvious that Cal is a Jedi, but when the main character isn’t in a city environment, and always causing havoc, I think adding in the option for Jedi robes wouldn’t make much difference in how discreet the character is (or rather isn’t). I think simple things like that could also make the game that little bit more replayable. Quite honestly though, the only customisation I got excited for was the saber design. From the options of different emitters, hilts and sleeves, to the cool little saber activation animation that plays after completing your new design, and of course that’s without complementing the colour customisation, which may seem limited to begin with, though as the story progresses, your given much creativity with both playstyle and aesthetic

They could have even added options for adding weapons, extra wings/engines to the Mantis, leaving room for making improvements that could perhaps affect the ships performance in story cut-scenes, like in Mass Effect 2 for example, where choices to not upgrade your ship could even get members of the players’ squad killed. And adding a few options to add binocular features to BD-1 to help see enemies from further away, could also leave room for further replayability, with the option to switch out features that could actually benefit BD-1, Cal and the player (as opposed to just the colour of the droid).

So, what about gameplay? Imagine a Dark Souls type difficulty of a game, with the puzzles of an Uncharted/Tomb Raider game with the saber skills of the old Star Wars Force Unleashed game of 2008. I think the level of exploration that’s available to the player, mixed with the challenge of facing an oversized bat in combat, and the level of thinking that goes into solving a puzzle, definitely makes the game a challenging grind. However, I did find myself feeling a sense of pride, when I finally reached the end of the game (though admittedly I did lower the difficulty of the final fight). 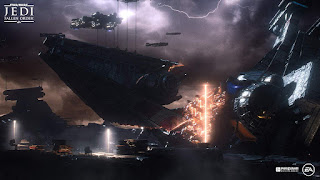 Originally the game had four difficulties: Padawan, Jedi Knight, Jedi Master, Grand Master however, after playtesting the game, they added in a story mode option, which I think greatly benefits the players that just want a rich Star Wars game to fill their desire for a fun story driven Star Wars game. I personally found the game a little challenging on the Padawan game mode, though admittedly it can be difficult to focus in a fight if you’re a little tired or thinking about work while playing. Which I think is where story mode best fits those that don’t have the time to find their “game face” and just want to interactive Star Wars experience.

If you’ve only been thinking about this game, because you’re hesitant as to the game's difficulty, or you’re worried about the retail price not giving a game that’s worth the money, I would recommend either waiting for the price to go down during a sale (if you can avoid story spoilers) or getting the game anyway, because I personally had tons of fun playing it, despite my minor gripes with the lack of customisation; the story itself and the well thought out combat system more than make up for it, and I believe it to be well worth the price for (roughly) 15 hours’ worth of a fun Star Wars experience.