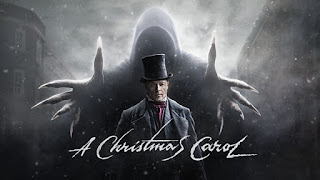 Ahead of the premiere of the three episode mini-series (on BBC One on 22nd, 23rd and 24th December), the BBC have released an interview with Ebenezer Scrooge himself, Guy Pearce...

Misanthropic businessman Ebenezer Scrooge (Guy Pearce) refuses to treat Christmas as different to any other day, much to Bob Cratchit’s (Joe Alwyn) chagrin, as he is desperate to leave work and get home to his family on Christmas Eve where Tim (Lenny Rush) writes his yearly thank-you letter to cousin Jack, thanking him for the money that saved his life, but Mary’s (Vinette Robinson) prickly reaction rouses Bob’s suspicions.

Scrooge’s dead former business partner Jacob Marley (Stephen Graham) begs for peace in his coffin. Having repented himself, the Spirits have news for him. He will linger in purgatory until Scrooge himself repents, something Marley knows he will never do. A spooked Scrooge is visited by Marley, who has a warning: Scrooge will be visited by three Spirits.


As midnight strikes, as warned by Marley, Scrooge is visited by the Spirit of Christmas Past (Andy Serkis). He takes Scrooge on a deeply personal journey, exposing his darkest childhood memories, his cut-throat business manner, his isolation and manipulation of those around him, including The Cratchits.

After The Spirit of Christmas Present (Charlotte Riley) shows him the humanity he has forgotten and The Spirit Of Christmas Future (Jason Flemyng) shows him his desolate future, Scrooge is forced to face the cruel consequences of his actions.

But will he repent?

An original take on Dickens’s iconic ghost story by Steven Knight (Taboo, Peaky Blinders), A Christmas Carol is a spine-tingling immersion into Scrooge’s dark night of the soul.

Knight said of the adaptation, "It is a true privilege to have the opportunity to offer a new interpretation of a timeless classic. This story has resonated with people all over the world for over one hundred and fifty years and that is proof that there is something as durable as a diamond at its heart. As someone in awe of Charles Dickens ability to create narrative and invent universally recognized characters, I have tried to stay faithful to the text. However, this has involved a close examination of what is written to find elements that perhaps Dickens in his own time was not allowed to write about due to contemporary sensibilities. I have asked why Scrooge is the man he is, what caused him to be so, and I have offered what I hope are challenging answers.

"Every generation hands Dickens on to the next generation, and this evocation is offered with respect for whatever is deep and significant, and for all the many things that are fun, seasonal and festive. Expect some surprises and lots of snow."

Here's the interview with Guy Pearce:

What makes this different from other versions of A Christmas Carol?

The original material is actually quite dark, in a similar way to old fairy tales being quite scary and frightening. I think what Steve Knight wanted to do with this was to look at Dickens’ original material and dig in further. There’s a brutality and a gravity to it that reflects real life more than a lovely, safe, snow-covered Christmas story.

The idea of Scrooge being taken back though his life still exists and the idea of him needing to take a look at himself still exists, but the journey that he goes on is far more painful and emotional than what we’ve seen before.

For Scrooge, who I play, Steve and Nick Murphy (director), wanted somebody far more contemporary in personality. They wanted a ruthless businessman, someone with swagger and confidence, who faced the world in a very logical, rational, powerful way. They wanted somebody almost like a bully, who had enough confidence to take everybody on. As opposed to the Scrooge that we’ve come to know who is usually quite a bit older, a crotchety miserable old man, who doesn’t really want to have anything to do with the world anymore and has no joy left. This Scrooge has real swagger and real attitude, so for the Ghost of Christmas Past to take him back, it requires a lot more conflict. It requires the Ghost of Christmas Past to be a lot more confrontational and ruthless and to really battle with Scrooge to get him back there. So, it’s a more difficult and a more painful experience.

Can you tell us more about your version of Scrooge?

When we meet Scrooge, we get a sense that he misses his business partner Marley, who has died. But we also get the sense that he has a toughness to him, he doesn’t crumble under things that are difficult for him, he just gets tougher and tougher and builds this wall up that enables him to continue to function in the world. Through the course of the story, that begins to come apart and unfold and we really see how vulnerable he is.

Has playing him made a lasting impression on you?

Every character you play leaves impression! I do think that the Scrooge in me was revealed a little as we were making this! I realised how grumpy I can be! I knew that anyway, but it was brought to the surface a little bit! 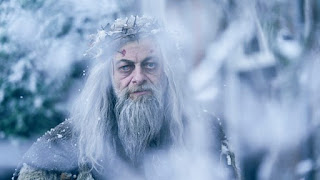 Can you tell us about the look of the show and the world that has been created?

It is set in the past. I remember when I read the scripts I had to ask Nick, our director: “Are we setting it in the past still because it feels contemporary to me?” There’s a flow and an ease to the language that just feels contemporary. Nick would remind us all the time that the problem with some period pieces is that actors and directors fall into the trap of thinking things should be very formal and people should speak in a particular way, that feels unnatural, because that’s what they did in the past. Whereas Nick argued that people spoke naturally in the past, just some of the words might have been different. It was important to Nick to make sure that we remained very human and real with each other, there is something a bit brittle about some period pieces that can alienate a modern audience a little bit. We’re wearing period clothes and, of course there’s the beautiful period sets, but Nick didn’t want it to be stuffy, he wanted it to feel like it looked new and fresh.

One of the funny things was, because we shot this in the middle of summer in the UK and we needed snow, there were snow machines blasting fake snow everywhere all the time. The art department really had a tough task to create this world, and they did an amazing job.

Because of all the art direction, those wonderful sets, the great costumes that we had and our hairstyles, it really took us back into the past, but the language that we had made it feel contemporary as well.

Tell us about Steven Knight’s scripts…

When I first heard about the project, I was given the names Nick Murphy, Steven Knight, Ridley Scott, Tom Hardy, FX and the BBC, and I immediately got the sense that was going to be a different project. And then I started reading it and that was made apparent. The consistently beautiful dialogue that Steven has written ensures you never lose track of the journey that Scrooge is on. Steve’s ability to write in this big but also very intimate way was so impressive to me. I’m still astounded by how he did it and what he’s capable of doing.

The other thing that really affected me when I read the scripts was there were scenes of dialogue that I have, and as I was rehearsing these lines myself at home they would make me tear up because they are so touching and so poignant and so painful. I would read them thinking: “How am I going to do this on set and not actually cry?!” It was like beautiful poetry. I spoke to Steve to clarify certain things and make sure I understood because I really wanted to honour everything that he’d written. We had a good sort of communication throughout the project and I would love to work with him again.

Why do you think the story of A Christmas Carol has resonated for so many years?

Well, ultimately, all of us had pain in our lives, all of us have had difficult things that have occurred and all of us have felt hurt, and we’ve also hurt others along the way. Quite often that’s not addressed, we just grow up and get on with it and try and live our lives as best we can.

The pain that any of us have experienced in our pasts still exists unless it’s worked through and resolved. So the idea of a character who is forced to look at their past, forced to look at what they’ve done to other people and what’s been done to them, I think means a lot to any of us. And the idea of being able to redeem ourselves is frightening and appealing. It’s scary to be vulnerable. It’s frightening to say: “I’m sorry”, “I’m wrong”, “please forgive me”, but at the same time, it’s rewarding and exciting and it helps us grow.

We’re all playing this game in life and it’s hard to be honest to ourselves about whether that’s truly who we are or if that’s just survival. Life is tough. And so, I think this story speaks to all that stuff that happens to us on a daily basis in a small way or sometimes in a big way. The fragility of life, the precariousness of our place in the world and with each other, and how we socialise, particularly in this day and age with social media. We need each other more now than we ever have before. That’s why a story like A Christmas Carol will probably keep coming up because it’s always relevant and probably becomes even more relevant as time goes on.