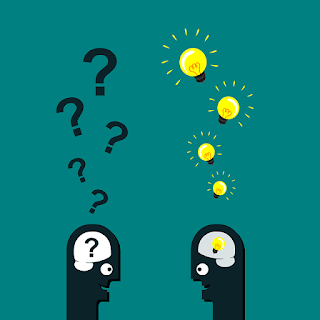 Susan Omand asks, and answers, the questions as she picks her top five TV quiz shows of the past 10 years...

My brain is weird. [That’s not news – Ed] I can physically feel my brain relax when it has a question to try and answer. I don’t mean the banal everyday “What’s for tea,” or even the existential everyday “Why am I here” kind of thing (although I do think about both). I mean factual stuff like how many UN recognised countries have animals on their flags (16 at last count) or who was the first person to score a goal in the FIFA Women’s Football World Cup Final (Michelle Akers-Stahl, as she was at the time, for the USA against Norway in 1991). Yep, facts, general knowledge, trivia; call it what you will, I love it and amass it on a regular basis. So, needless to say, I’m a bit of a sucker for TV quiz shows. Now, I don’t mean topical news panel shows, like HIGNFY (everybody else pronounces it ‘higniffy’ too, right?) or Mock the Week where there are questions but really they’re just a way of sparking comedic conversation among the panellists, although they are great fun to watch. Nor do I mean overly specialised quizzes like Mastermind and University Challenge, where getting one answer right, or sometimes even understanding the question, is a win for me. No, I mean quiz shows with a variety of questions that are challenging but that I still have a fighting chance at getting, or at least learning something because I usually have to go and look stuff up after the show has finished; yes I realise that I am alone in this act, I told you my brain was weird.

Anyway, TV quizzes have been on the up and up in the past 10 years, with so many different formats vying for space in the Daytime and Evening schedules and I wanted to highlight a few of my favourites of the 2010s with a Top 5 so you can look for them and give them a go yourself.

But first an honorable mention - At this time of year, a must watch for me is the Big Fat Quiz of the Year, where Jimmy Carr basically hosts the equivalent of a pub quiz for an hour and a half, there are categories of questions related to the year just gone and the teams do take it a bit seriously, although you still get a good laugh at some of the answers. This year’s edition is on Boxing Day on Channel 4 and there’s a special Big Fat Quiz of the Decade on January 2nd, so set your telly box watcher things. 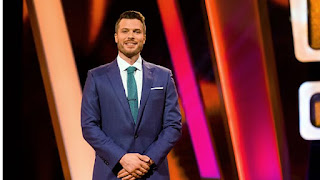 Now this is a fairly new one I think and one you may not have heard of because of it’s Daytime TV slot but, when it’s on, I time my lunchbreaks so that I can watch it. The idea is that there are three multiple choice answers to the given question, one right, one wrong but still plausible and one that can’t possibly be right and, if you choose that one, you’re out of the game. The questions are challenging and it is not often blatantly obvious which is the impossible answer. For example:

Who was the last of King Henry VIII’s wives? 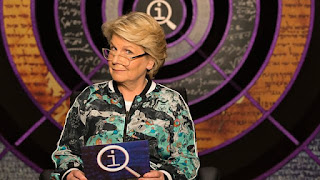 Yes, I know it’s more of a panel show than a quiz show but there are good questions and I learn so much from it (not least by fact checking some of the more incredible answers) as each series deals with a letter of the alphabet and each show has a theme. I will admit I was concerned when that doyenne of trivial intellect that is Stephen Fry stepped back from being question-master in 2015 but Sandi Toksvig is a brilliant addition and, dare I say it, makes the show even better with her dry wit and boundless anecdotes. 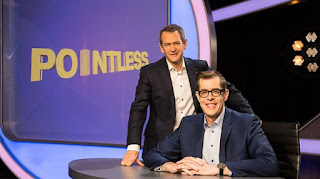 Yes, ok, it’s not a “have to record it in case I miss it” show but it is a very regular watch because it’s on in the kitchen when I’m making the tea. I am usually fairly good at answering the questions, or coming up with low scoring answers (which is the, er, point of the quiz). Alexander Armstrong and Richard Osman work very well together as hosts and have a bonhomie born of a long-standing genuine friendship, although it is much appreciated that they still manage to keep the banter to a minimum and concentrate on the quiz which is great. As for the questions, it is a “try to answer everything on the board as it comes up” for me, I find the anagrams are great fun, trying to work out the answers from the clues is fun and they always have fantastic film questions in the later rounds. Just don’t go for the Pointless Celebrities show if you’re going to try it – they really are pointless. 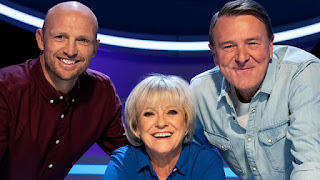 I’ve been watching Question of Sport for more years than I care to remember now because it was as much of a staple in the household when I was growing up as it is now. Again, the regular team of host Sue Barker and current team captains Matt Dawson and Phil Tuffnell have a lot to do with how much fun the show is to watch. It’s not so much a “shouting the answers at the telly” kind of quiz this time, because it often features sports that I’m not too familiar with, although I do enjoy trying to guess the mystery guest or working out clues in the One Minute round where sports stars share their names with themes. It’s more about enjoying watching how the participants get on and the antics they get up to in rounds like the Sprint Finish, where they have to describe sporting terms without using the words on screen and it can get fraught and hilarious as the team captains try to act out sports or miss the obvious way of describing something. But the best thing for me is that, because the teams are always comprised of different sportspeople (some modern, some, shall we say, classic) it can get VERY competitive indeed. 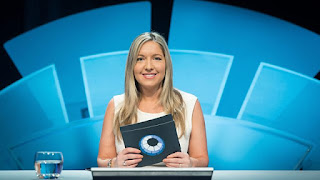 By far and away my absolute favourite quiz show of the decade and, yes, a "must record" if I don't watch it live. The idea is that random things link together in fiendishly obscure ways*. In round 1 you have to guess the theme (for example what connects a hammer and feather, six American Flags, Eugene Shoemaker’s ashes and two golfballs?) Round 2 means you give the next in a sequence (e.g in you get the pictures of Courtroom scene; Kevin Pietersen; A vinyl record what comes next?). Round 3 is always The Wall which has 4 sets of 4 things that link together, as in round 1, but this time there are red herrings that can fit in more than one group and only one fully correct result. The final round is always the missing vowels round against the clock where you are given the theme and the answers on screen but with all the vowels taken out. For example: Words with four Ns – NNN CNM NT, or Things that are not Orange – WLL MFR NG, or War Films – PCL PSNW. Add in the sarcasm of Victoria Coren Mitchell and you have a winning formula that has run successfully now for fifteen series and countless specials.

Well I think it’s fun anyway, but my brain is weird.


* By the way, here’s the answers to the examples I’ve given in Only Connect, because I really REALLY hate being left without knowing the answers to such things.

Round 1 – things left on the moon.

Round 2 – the final picture could be Mhairi Black as you’re looking for an MP to go with JP, KP and LP

Round 4 – Announcement, William of Orange and Apocalypse Now.