Audio - Doctor Who: The Girl Who Never Was 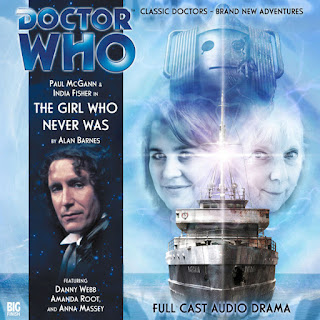 Our Doctor Who audio expert, Tony Cross, delves into the back catalogue available from the Big Finish website. Today is the Eighth Doctor and Charley adventure The Girl Who Never Was...


As with my other article. There are SPOILERS here if you haven't stumbled across this since December 2007.

The fallout from the death of C'rizz continues. Charley wants to leave. She intends to disappear, knowing that she's supposed to be dead. Instead of dropping her off in France amongst the wreckage of the R-101 he intends to leave her in Singapore. After all that's where she was heading when they first met.

But the TARDIS has been knocked off course and whilst they have made Singapore it is 2008, which Charley thinks is deliberate, but the Doctor reckons something is afoot. It turns out there is. A ship, missing since 1942, has turned up, the SS Batavia. There's a man called Byron (Danny Webb) looking for it. And his 85-year-old mother, Charlotte Pollard (Anna Massey). The elder Charlotte doesn't remember The Doctor having been found in a lifeboat, memory wiped in 1942. The sole survivor of the SS Batavia.

Following some jiggery-pokery The Doctor finds himself in 2008/500,002 and Charley in 1942, which is when the SS Batavia disappeared. With only one survivor.

I love a haunted ship story, and this has the added complication of a rather raddled, battered and messed up gang of Cybermen who having fallen out of the vortex during a time experiment then decide - as is the wont of Cybermen - to take over the world and convert everyone. We will be like them apparently.

Alas for them and their old school Invasion style Cyber Controller the best laid plans of Cybermice and men oft gang agley. Especially when the Doctor's concerned. Poor things.

Charley gets chatted up by Byron's granddad in 1942 and then taken over by the Cyber Controller, Byron and his mother - the Australian Borgias as the Doctor describes them - get into something of a hassle, alongside the Doctor. Byron gets part-Cybernetized - or whatever the correct term is - and kills his Mother who isn't Charlotte Pollard but Madeline Fairweather who we've met - as her younger self - back in 1942. Are you keeping up? Good. They'll be a quiz at the end.

The Doctor causes the Batvia to sink in two time-zones by two different methods - iceberg and torpedo, rescues Charley from the Cyber-Controller (during which process he accidentally wipes Madeline's), tries to hypnotise her into forgetting him and everything about him in order to save her brain from collapsing as the result of the damage done to it by the Cyber-Controller. Phew. Busy day for the Doctor. Charley throws off the attempted memory wipe & seems about to go back to the TARDIS again, all post-C'rizz trauma forgotten.

Unfortunately the Cyber-Byron is waiting inside the TARDIS. Now when that happened, I got really annoyed. It seemed like such an unnecessary extension of the story - I said "O for f**ks sake" at that point.- but I should have had patience. It's a virtue you know.

Cyber-Byron seems to have killed the Doctor but taking Charley outside they run into some Cybermen...and now I shall skip to the end.

The HADs system in the TARDIS kicks in before Charley can make it back and deposits the Doctor back in Singapore. He'd faked his death but discombobulated his memory. He can't remember what's happened and thinks he back right at the beginning of the story. He finds the message left for him by Charley all those episodes ago and thinks she's left him. He leaves.

Charley meanwhile has washed up on a desert island after escaping the sinking Cybership. She's hoping for rescue. Sending Morse messages out on a homemade radio. Then the TARDIS lands. Charley is delighted. The doors open. And...well there's a little piece of a tiny surprise for you.

This is a nice story. India Fisher does her usual excellent work in her final story. Her relationship with Paul McGann's 8th Doctor is well played out as it comes to an end. It's a shame to see her depart. I've enjoyed her company: feisty, funny, over-excitable, posh and sometimes a little annoying she's been a good companion.

Danny Webb plays Byron, the Australian. I'm not entirely sure about his accent but he is as realistically annoying as a certain type of Australian man can be: all mouth and no trousers. Anna Massey is exceptional as Charlotte Pollard (the Elder) who at 85 has abandoned all pretence of tact in favour of a certain directness, which is rather refreshing. Her and Byron have an interesting relationship, which involves verbal sniping and occasional violence. It's an odd family set-up.

The rest of the cast do a fine job too but really this is Charley's story and it is a nice one to go out on. In fact - not in fact but in my opinion - these post-Divergent Universe stories have been the most enjoyable run in the 8th Doctor's Big Finish era. They have their share of darkness and angst, but it doesn't quite weigh down the stories as much as perhaps it did during the 'Dead Charley Arc' and the 'Divergent Universe Arc'. McGann certainly seems enjoying it a little more. Perhaps (and this is probably total bollocks) the fact that by the time he was doing this run he was no longer 'THE DOCTOR' but the 8th of 9 (and then 10) took a little pressure off. He could be his own Time Lord.