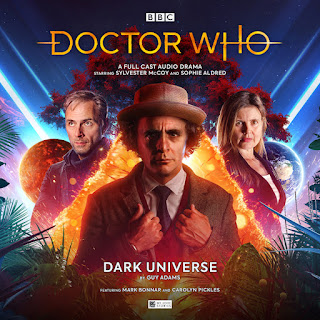 Not only does the story pick up the threads of the relationship between the Doctor and an older Ace, in her now grown-up role as CEO of A Charitable Earth, it also features intriguing timey-wimey crossovers with a number of other Big Finish spin-off series.

The Eleven has a plan. A grand plan. An appalling plan. A plan that endangers all life in the cosmos.

With Ace working against him, the Doctor must rely on scheming Time Lord Cardinal Ollistra for help. The stage is set for an epic confrontation.

Because the Doctor has a plan to stop the Eleven. A grand plan. An appalling plan. A plan that endangers all life in the cosmos.

Whichever one of them wins, the Dark Universe won’t want to lose... 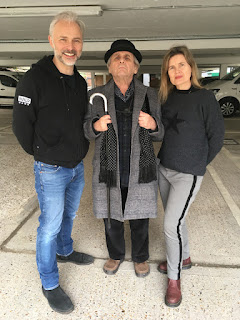 Mark Bonnar returns as the Eleven, a Time Lord psychopath in his eleventh incarnation who retains the personalities of all his previous incarnations, in his first chronological meeting with the Seventh Doctor.

Producer, David Richardson, said, “I’d long planned that if ever I was in a position to make it happen, we’d do a story with the Seventh Doctor and the Eleven, and tell the lead-in to the first scenes in the Eighth Doctor series, Doom Coalition. So when Emma Haigh and I took over as joint producers on the Seventh Doctor stories this year, I leaped at the opportunity and asked script editor Matt Fitton to commission a script.

“There’s a lot in Dark Universe – not only does it return to the Eleven’s story, it also shows what happens to Ace in her later life. And it features Ollistra and Rasmus, two characters who are important to our ongoing Time War series, plus it sets up other things too... It’s actually a pivotal release, for so many reasons.”

Actor Mark Bonnar added, “I was really pleased with the script as it gave a bit of the Eleven’s backstory. When I first played the Eleven, Sylvester was the Doctor who caught him. I’d met him previously because Sophie Aldred is a pal of mine, but it was really good to work with him as we hit it off pretty much straight away.”

“I really enjoyed being the Eleven with another Doctor this time – I hope there are plans to have him meet some of the other ones!”

Doctor Who: Dark Universe is available now as a collector’s edition CD or on download at the Big Finish website from £12.99.