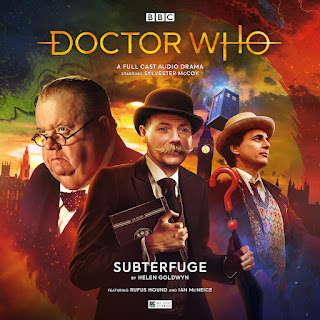 The Seventh Doctor meets another renegade Time Lord in March 2020, as Sylvester McCoy and Rufus Hound star in a brand new, full-cast audio Doctor Who adventure from Big Finish...

The Meddling Monk is back to change established British history, this time by altering the results of a very important election. Doctor Who: Subterfuge also features Ian McNeice, reprising the role of Winston Churchill, as first seen on television in 2010’s Victory of the Daleks.

London, 1945. Winston Churchill campaigns for re-election. His new strategic adviser assures him that Britain has a bright future under his continued leadership. It’s a vote he can’t possibly lose. But the Doctor knows that he must.

The Monk is meddling, altering history for his own selfish ends. With spies and aliens in the mix, Winston realises victory may not be so simple. But at least he can trust his old friend... can’t he?

Actor Rufus Hound said, “This feels like a really classic Doctor Who story, with the Seventh Doctor actually helping Churchill by not helping him. To an extent, as someone who wants to deify Winnie without a second thought as to what’s better for everyone else, the Monk may well be a cypher for any number of modern public servants. It's not really a political story per se, but it is a chance for me to (time) lord it up over Sylvester McCoy so, as ever, it’s been an absolute pleasure to play.”

Writer Helen Goldwyn said, “It was a really fun challenge to set a story post-war and involve the Monk in political shenanigans! My research into some of the real espionage during WWII inspired all the double-crossing that goes on here and I loved the idea of the Monk and the Doctor having to fool Churchill in their respective ways. Great fun to have them sparring too, while trying not to give the game away!”


Doctor Who: Subterfuge is available now as a collector’s edition CD or on download at the Big Finish website from £12.99.