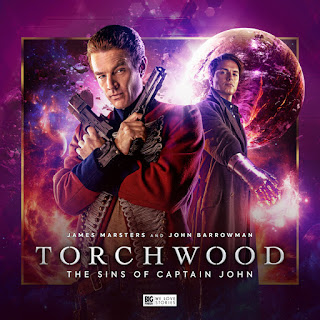 James Marsters returns as Captain John in a new Torchwood box set, out now from Big Finish Productions, in association with BBC Studios...

In this bumper box set of adventures, set before the Torchwood TV timeline, Captains John and Jack play cat and mouse (and Stepford wives) across a universe full of gas planets, exploding space stations and hot tubs.

Fans will find answers to many of the questions they’ve been asking. The Resurrection Gauntlet or ‘risen mitten’, which featured in the first two series of the show on television, return, but in the hands of Captain John, it can only spell disaster…

In the words of the Captain: "Go on. You know you want to." 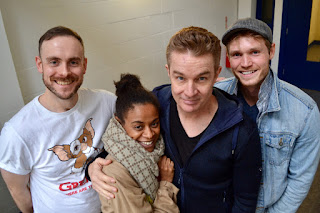 Rogue Time Agent Captain John Hart is on a mission. He is ransacking his way through space and time looking for the Resurrection Gauntlets that have the power to bring the dead back to life. Only they're broken, and their creator is in an impossible prison, and he's not the only person looking for the gauntlets.

And John hasn't asked himself exactly why his employers want them, which could turn out to be a problem.

Captain John is in Restoration England. There's intrigue in the Tower of London, the dead are walking the streets, and the severed head of Oliver Cromwell has a terrible warning.

Captain John is in a wooden space prison that's under attack by a strange and terrible life form. Also the catering is truly dreadful and Dr Magpie's latest discovery may have got a little out of hand.

Captains John and Jack find themselves stranded on a world that may be actual paradise - the weather is pleasant, the people are friendly, and the giant stuffed animals only come out at night. There's only one thing the world is missing. No-one has ever explained to any of the population about the birds and the bees. Which is unfortunate.

Captain John arrives at the funeral of one of the galaxy's richest men. He died without making a will, and his heirs have some very creative ideas about how this can be put to rights involving murder, necromancy and seduction. Sadly, Captain John is only too happy to oblige. 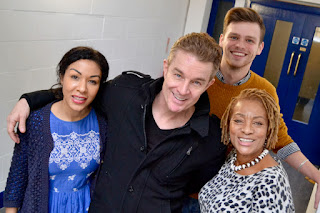 Actor James Marsters said, “I’ve missed doing Torchwood so much. Beyond being proud of playing a part in it, the character itself is a blast to play, and those few TV episodes just weren’t enough.

“I try to be a nice person in real life. The trick of it for me is about not telling you what I'm really thinking. I think that's true of most people that try to be nice. We don't inflict our inner monologue on everyone. The great thing about playing Captain John is that he doesn't bother with that. He just tells you what he's thinking. So, combine that part of me with really good writing, and really funny dialogue, and you get someone that you actually want to spend time with.”

Writer David Llewellyn added, “Captain John is this chaotic, disruptive, insubordinate force of nature, completely amoral and unpredictable, so that gave me a lot of freedom! Writing is often a case of knowing when to hold back, when to tread a more subtle line, but with Captain John it’s the complete opposite. The stories are also set before the time when Captain Jack meets the Doctor and joins Torchwood so these characters really could go anywhere and do anything.”

Producer James Goss said, “Torchwood: The Sins of Captain John is a very adult, fourth-wall breaking trans-temporal farce involving treason, the undead and murder. Captain John Hart seems very aware that he's in a Big Finish audio drama, and makes the listener complicit in his appalling crimes as he does whatever it takes in order to survive.”

Torchwood: The Sins of Captain John is available now as a collector’s edition CD at £27.99 or on download at £24.99 from www.bigfinish.com