Book – All the Best Lies 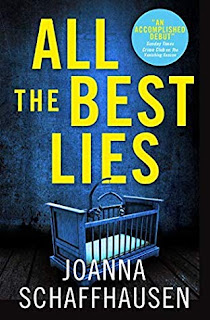 FBI agent Reed Markham is haunted by one painful unsolved mystery: who murdered his mother? Camilla was brutally stabbed to death more than forty years ago while baby Reed lay in his crib mere steps away. The trail went so cold that the Las Vegas Police Department has given up hope of solving the case. But then a shattering family secret changes everything Reed knows about his origins, his murdered mother, and his powerful adoptive father, state senator Angus Markham. Now Reed has to wonder if his mother's killer is uncomfortably close to home.

Unable to trust his family with the details of his personal investigation, Reed enlists his friend, suspended cop Ellery Hathaway, to join his quest in Vegas. Ellery has experience with both troubled families and diabolical murderers, having narrowly escaped from each of them. She's eager to skip town, too, because her own father, who abandoned her years ago, is suddenly desperate to get back in contact. He also has a secret that could change her life forever, if Ellery will let him close enough to hear it.

Far from home and relying only on each other, Reed and Ellery discover young Camilla had snared the attention of dangerous men, any of whom might have wanted to shut her up for good. They start tracing his twisted family history, knowing the path leads back to a vicious killer—one who has been hiding in plain sight for forty years and isn't about to give up now.

I had actually read the first book of this series from Joanna Schaffhausen when I had been gifted The Vanishing Season by one of my children and remember thinking that there was something quite special about how it was written when compared to other crime series. It built well, full of tension, with well-crafted characters but there seemed to be something in the psychological elements that stood above the usual standards in this particular element of the crime genre. A quick Google of Schaffhausen explains why, this is somebody with a doctorate in psychology and a specialism in the human brain and how it works, and this spills wonderfully into the writing. Would a third instalment of the series keep up these high standards though? Yes, is the answer, my word, yes.

The story itself is a fascinating one, taking on the cold case part of investigation that I particularly love and having a crime based in the personal life of its investigator was a joy to read. It wasn’t just about the crime; the character of Markham was the baby in the room when the crime was perpetrated and so whilst he had a steel about him to bring his mother's attacker to justice he also went on a journey of finding out who he was, where he came from, and how his adoption happened forty years previously. Add the already wonderfully crafted character of Ellery Hathaway into the mix and you now have two principles with flaws and history of their own, and a history together, developing their friendship and learning about themselves together in the most horrific of circumstances. The crime story itself is solid, I didn’t guess who the guilty party was until the book allowed me to learn that information, and all the suspects and story strands as the book progressed were interesting and added to the plot allowing for a complex backstory to play out in a fresh and enjoyable way.

Schaffhausen is a writer I will certainly be reading more of, the second instalment in this series is already in my online shopping basket and reading them out of order doesn’t matter too much as they are very stand alone stories that fill in any backstory you may need as the narrative unfurls. All the Best Lies is a stunning book, a real page turner with a psychological edge not often found in crime fiction. What a marvellous start to my reading year.