Book - The Big Picture: The Fight for the Future of Movies 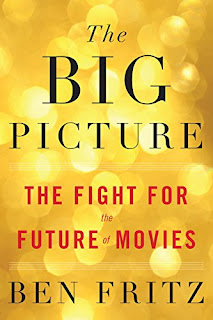 Even when he's on holiday, Steve Taylor-Bryant can't stop researching the movie business. Here's his review of Ben Fritz's book The Big Picture: The Fight for the Future of Movies...

Ben Fritz, a Wall Street Journal journalist, turns his business eye to the state of the modern movie studio world in his excellent book The Big Picture. Since this decade is up (I’m writing this on New Year’s Eve as apparently I don’t have a social life) Fritz’ look back at the rapid decline of thoughtful drama and raucous comedy films in favour of a branded CGI-fest is a sobering yet fascinating look at how quickly business changes but it also, more importantly, shows fans of film that Hollywood is most definitely a business and is there for their bottom line and not your entertainment.

Where do you start with an industry that has started to employ Moneyball tactics to their slates? Well, you start with the executive that brought the world Moneyball, Amy Pascal. The book focuses heavily on Pascal and on Sony because, when cinema changed, it was Sony that weren’t ready, nowhere near prepared. Whilst the Sony hacks were embarrassing and full of tabloid fodder and name calling, Fritz concentrates on the business aspects of the wealth of emails released, as well as interviews with Pascal and other Sony hierarchy, and showed, with Sony’s actions as the last decade began, how their older, and in my opinion correct, way of operating was not in any way in keeping with the industry. Pascal used her filmmaker gut and pumped out dramas, thrillers, comedies and family entertainment at reasonable budgets, the $30million plus bracket, and was heralded by stars and directors as the most artist-friendly executive in Hollywood. The problem came when the industry changed to CGI-fest event movies and Sony only had the smallest amount of franchise and branded characters to work with. A bungled deal for the rights of Marvel comics left Sony with only Spider-Man whilst Warner had DC, Harry Potter and the likes and Marvel started their own studio. A Spider-Man reboot and subsequent sequel failed to have an impact, and then Disney started buying companies and suddenly cinema changed and Pascal was out.

What Fritz does brilliantly in The Big Picture is explain to those film fans like me, who are desperate for mid budget originality, why that era of cinema is dead and why we now need to embrace streamers like Netflix, who make content for absolutely everyone, and Amazon, who are basically the future of art house films, to get our fixes. He goes into great detail about the changes at studio level, the involvement of China, first as a market and then as investors, whilst giving good coverage to those smaller production houses still producing great movies on minuscule budgets by taking all the risks for their distribution partners, the major studios.

Cinema has changed more dramatically in the last decade than in the previous century and the book finishes before Disney’s acquisition of Fox but does point towards more studios becoming teams or smaller with streamers and private finance houses becoming the saviour of non branded cinema. The Big Picture is a sobering yet entertaining read and a deep dive into a business still changing rapidly.