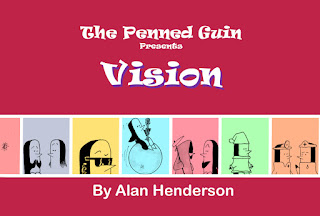 What’s black and white with 2020 Vision? Alan Henderson’s Penned Guins are back with a new collection currently available for pre-order on Kickstarter. Susan Omand takes a look...

I do love a good pun [No! Really? – Ed] and, for me, there are no greater pun proponents on the comics scene just now than the little black and white guys that inhabit the daily social media cartoon strip of The Penned Guin. I’ve reviewed and enjoyed several of their collections before [read those reviews here – Ed] so was very much looking forward to seeing if, after so many years (nearly seven now, apparently) of gracing our timelines, the latest collection lived up to all the rest.

Well, of course it did. Vision is an all new anthology, featuring more than 180 strips which first appeared online over the past year and there’s some absolute crackers (and cracker joke level humour) among them. Dipping into the book the first time, it took me a minute or two to realise that there are often two different and unrelated 3-panel strips per page rather than linked themes or a six-panel story – I thought that maybe the humour had gone totally surreal but no, it was my misunderstanding and once I had sorted myself out then the laughs came thick and fast with loads more of the same fun that I have come to love; all the puns and “dad” jokes that you could ever wish for, delivered by the fourth-wall breaking birds. And, as usual, there are several panel-wall breaking strips too as the Penned Guins think outside the box… literally!

One thing I did notice this year is that the short-form humour is straying towards more “grown up” subjects in some cases, with more near the knuckle jokes and alcohol-based humour than I’d seen in previous years. I’m not saying that it’s a bad thing, it’s just not what I personally am used to seeing with these usually very family friendly strips and, for me, one or two didn’t sit that well because of that. However, the majority are very much fun for all ages to enjoy and, as always, the penguins are always penned beautifully with so much humour and expressiveness in each little be-beaked face.

There’s more than just the three-panel cartoons included in Vision too, with some very cleverly “guinned” film and TV posters as well as some of the longer 9-panel stories which have been making an appearance online at weekends. Laugh out loud cartoons for me this time included “the benefits of Omega 3,” “the one thing I hate about Halloween” and “when you said you were getting a tattoo” but my absolute favourite this time is purely visual with no words at all… to find it you might just have to buy the book!

That’s where the current Kickstarter comes in very handy indeed. Already over its minimum funding level, you are guaranteed to get whatever you pre-order and it’s a great way to p…p…p…pick up some extra perks too (sorry, had to). So, what’s on offer this time around? As well as print and digital editions of Vision, obviously, there’s the chance to bag yourself some of the original comic strip artwork. Or you can catch up your Penned Guin Library with copies of the “don’t Judge Me” Treasury, which hasn’t been available through Kickstarter before, or even to grab a whole back catalogue with all the previous print books. For me, though, the star buy has to be the Pulp Fiction T-shirt design which is just superb.

I’ll let the man himself, Alan Henderson, explain more in his Kickstarter video below (wearing said t-shirt design) and then you can support the Kickstarter and experience some Penned Guin 2020 Vision for yourself.