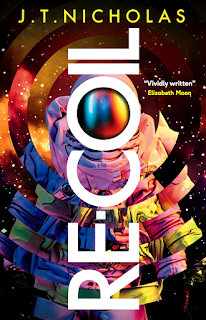 What choices would you make when life is eternal and death is just a transient condition? Titan Books announce the publication in March of J T Nicholas' latest science fiction novel Re-Coil...

Carter Langston is murdered whilst salvaging a derelict vessel – a major inconvenience as he's downloaded into a brand-new body on the space station where he last backed himself up, several weeks’ journey away. But events quickly slip out of control when an assassin breaks into the medbay and tries to finish the job.

Death no longer holds sway over a humanity that has spread itself across the solar system: consciousness can be placed in a new body, or coil, straight after death, giving people the potential for immortality. Yet Carter’s backups – supposedly secure in an inviolable storage system – have been damaged, some of his crew are missing, and everything points back to the derelict ship that should have been a simple salvage mission.

With enemies in hot pursuit, Carter tracks down the last member of his crew – re-coiled after death into a body she cannot stand – to delve deeper into a mystery that threatens not only themselves, but humanity and identity as they have come to know it.

Re-Coil propels its impeccable plot at breakneck speed as it considers the societal and personal dilemmas of immortality through a world that supplies an endless array of replacement bodies. Nicholas deftly explores the implications of technological developments and the effects they inevitably have on identity and gender.

J.T. Nicholas is the author of the upcoming science fiction novel Re-Coil and the neo-noir science-fiction series The New Lyons Sequence. When not writing, J.T. spends his time practising a variety of martial arts, playing games (video, tabletop, and otherwise), and reading everything he can get his hands on. He currently resides in Wilmington, North Carolina with his wife.

Re-Coil will be published by Titan Books on 3rd March