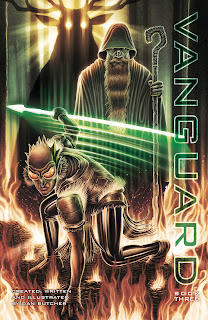 Our favourite comic-con of the year, True Believers Comic Festival is on again in Cheltenham this Saturday and, this year, it will also provide the launchpad for Book Three of the collected comic series Vanguard by Dan Butcher...

Vanguard is a Brit-Based superhero comic set in the not too distant future and, following the success of VANGUARD Book Two, which launched at True Believers Comic Festival in 2018, the comic's creator Dan Butcher returns to Troobs this year to launch Book Three.

The Vanguard fought for the very freedom of our nation.


Pitted against them: an army of faceless super-soldiers, conniving corporate meta-humans and back-stabbing enemies from within.


They tried. They died.

Now, 15 years after defeat, in a world governed by merciless corporate tyranny, a new band of very different heroes arises to take up the fight.

The book is 196 pages long, boasting cover art by comicbook creators Martin Simpson (The Needleman) and Steven Stahlberg (World of Blue), and collects together the complete issues 10-14 of the webcomic, previously published on VanguardComic.com.

Dan Butcher has worked on various comics including Comichaus, The Spark, El Marvo among many others. He also serves as one of the three hosts on the Awesome Comic Podcast.

You can still get your tickets from True Believers Comic Festival HERE.