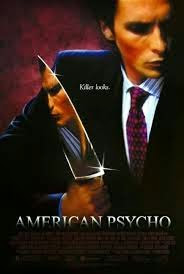 As it's Christian Bale's birthday, a reminder of Daniel White's look back at the cult classic American Psycho...

American Psycho is one of those films that, once you've seen it, becomes part of you and, at the same time, leaves its bloody mark on you as well. Adapted from the novel by Bret Easton Ellis and starring Christian Bale, it follows the confession of Patrick Bateman as a kind of cathartic venting. Bateman is a successful Investment Banker for a large Manhattan firm, narcissistic and selfish, whose whole life revolves around his career and his equally self centred associates. Bateman however is also a vicious sociopath and his lust for blood is building to alarming and uncontrollable levels. As he moves through his vapid, daily cycle, Bateman becomes increasingly aware of his pointless existence and seeks to rid society of the Yuppy Scum that he categorises himself as.

The film is notable because Bateman's monologues are almost in every case taken word for word from Ellis's original text. The viewer is given a piercing and unflinching taste of what is really going on inside the benignly smiling Bateman. As Bateman says himself, "there is an idea of a Patrick Bateman; some kind of abstraction. But there is no real me: only an entity, something illusory. And though I can hide my cold gaze, and you can shake my hand and feel flesh gripping yours and maybe you can even sense our lifestyles are probably comparable... I simply am not there." American Psycho cannot easily be written off as another amusing and thrilling murderous rampage and neither can it be dismissed as fanciful. Although Bateman's increasingly bloody encounters with the Manhattan high fliers is deliberately excessive, and believe me when I say you will never be able to listen to Huey Lewis and The News in the same way again, there is also an enormous amount to like about him. 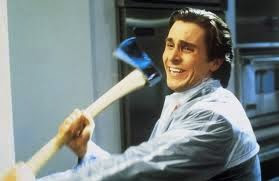 Bateman is a killer and an unhinged one as well but, really, who can really blame him? He is making a stink load of money in an environment where it can near-devastate your day to find out your business card isn't quite the right shade of egg shell. He has lost who he is or even who he ever was and, as a result, feels no culpability for his crimes. Let's be honest too about the fact that Paul Allen (a wonderful performance by Jared Leto) is so nauseatingly facile that every one of us cheers when Bateman axes him to death. At its dark heart, American Psycho flicks two fingers at the eighties with their excess and lack of discernible taste in cuisine. Everything was so small back then, food wise, even it was more about style than substance. This facade is losing its power to enthral Bateman and, like every good sociopath, he resorts to murder. So everyone is so thoroughly unlikeable that you don't care in the slightest when Bateman chops them up into little pieces.

Then there is the soundtrack to the film and, as Bateman espouses the virtues of Fore by Huey Lewis and The News, he is preparing to dispatch another victim. As a musician, his comments are spot on but I have to question his musical taste, Whitney Houston just doesn't seem right for him, but I guess his eclectic musical taste mirrors his cracked mind.

If you haven't seen American Psycho where have you been? With its sharp comment on materialism and the excess of a decade that taste forgot it is simply one of the best films of the decade. Add to this a tour de force performance by Christian Bale and you have an evening that you will never forget. Bale based his performance on an interview he saw with Tom Cruise on David Letterman's talk show, he was struck by Cruise's "very intense friendliness with nothing behind the eyes" and he was really taken with this energy. Even as a Cruise fan I have to admit I had noticed that Cruise never smiles with his eyes, kind of shark like isn't he? Bale also trained and honed his body for 2 months before shooting started, something he is so amazingly good at doing for any role he takes on.

If you have a spare Friday or even if you don't, clear your schedule, Patrick Bateman does not like to be kept waiting!