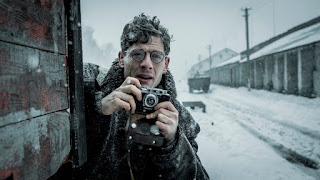 The extraordinary and powerful story of the real-life Welsh journalist who uncovered Stalin’s genocidal famine in Ukraine in the 1930s. Watch the trailer for Mr Jones, out next month from Signature Entertainment...

1933. Gareth Jones (James Norton) is an ambitious Welsh journalist who gained fame after his report on being the first foreign journalist to fly with Hitler. On leaving a government role, Jones decides to travel to Moscow in an attempt to get an interview with Stalin himself. Hearing murmurs of government-induced famine, Jones travels clandestinely to Ukraine, where he witnesses the atrocities of man-made starvation. Deported back to London, Jones publishes an article revealing the horrors he witnessed but is accused of being a liar by those who have an interest in silencing him. As the death count mounts, Jones has to fight for the truth.

Director Agnieszka Holland said "The key to the story for me was the story line of George Orwell writing his famous allegorical dystopian novel – Animal Farm. Jones discovering the truth about the mass murder of Ukrainian peasants somehow inspires Orwell’s story and becomes a part of it. We wanted the movie to be simple and real; the stylistic devices we used are mostly invisible, except when we want to express Jones’ motion, energy, his appetite for truth – then we use inspiration from the Soviet avant-garde."


Signature Entertainment presents Mr Jones in Cinemas from 7th February and on DVD and digital from 10th February.