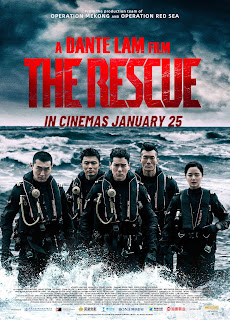 One of the most anticipated Chinese action thriller releases of the year, and the latest from legendary director Dante Lam, watch the trailer for The Rescue, coming to cinemas next weekend...

For the Chinese film industry, the Lunar New Year is akin to Hollywood's summer blockbuster season. It's a time when major studios release their largest tentpole movies, helmed by the country's top directors and featuring its biggest stars. Eager audiences pack local cinemas ready to be exhilarated while box office records are shattered on a now-annual basis.

The Rescue is the first film to showcase the China Rescue & Salvage (CRS), a lesser-known division of the Chinese Coast Guard. Founded in 1951, the unit is charged with responding to all maritime emergencies on Chinese waters, which range from shipwreck salvage missions to marine firefighting. After learning about the CRS five years ago, Lam became determined to bring the stories of these unsung heroes to the big screen in a very big way.

The film chronicles a Chinese rescue team's death-defying mission to save survivors of a fiery offshore catastrophe. Comprised of men and women from various backgrounds and led by a maverick captain (played by action star Eddie Peng), the unit must set aside their differences to face escalating challenges across air, land and sea. At the same time, the film has a powerfully human story at its core, with its team of down to earth characters showing incredible heroism and bravery as they sacrifice everything to save lives in the face of deadly danger. As well as Peng, The Rescue has an all-star cast of top Chinese talent including Wang Yanlin (Operation Red Sea), Xin Zhilei (Brotherhood of Blades) and Lan Yingying (Pacific Rim Uprising).

As with all of Lam’s films, the director insisted on authenticity to make the action as hard-hitting as possible, including the use of a real aircraft in a plane crash scene, and with the cast undergoing strict professional training before the shoot and performing their own stunts during filming.

The film is one of the biggest Chinese productions of recent years, with a budget of over 700 million RMB, shot on location in China and with underwater scenes shot at the world-famous Baja Studios in Mexico, where James Cameron produced Titanic. Five years in the making, the film had a high caliber Chinese and Hollywood crew headed up by Dante Lam’s long-time production partner Candy Leung, Academy Award winning cinematographer Peter Pau (Crouching Tiger, Hidden Dragon), production designer Martin Laing (Titanic) and Special Effects Supervisor John Frazier (Spider Man, Transformers and The Pirates of the Caribbean series), working together to bring this audio-visual spectacular to the silver screen.

The Rescue arrives in UK cinemas nationwide on January 25th through CMC and will be available in dubbed (watch the dubbed trailer here) and subtitled formats.

The Rescue will open in the following cities and locations in the United Kingdom:

Celebrated for his uncanny ability to seamlessly blend bombastic thrills with emotionally-charged performances, Lam is a prominent figure in the world of modern Chinese action cinema. His last film, Operation Red Sea, is one of China's highest-grossing movies of all-time. Lam began his career as an assistant director and actor in the Hong Kong film industry before making the transition to writing and directing. Lam's other recent works include Operation Mekong, The Viral Factor, Unbeatable, That Demon Within and To the Fore.