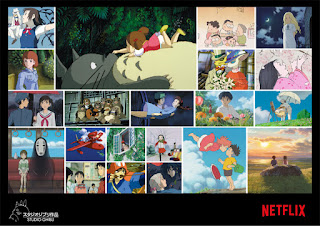 It's time for Studio Ghibli fans to clear your diaries as 21 films from the animation studio are being added to Netflix over the next few months. Here's what's coming up...

Beginning on February 1st, 21 films from Studio Ghibli, the Academy Award®-winning Japanese art house, will be made available on Netflix globally (excluding US, Canada, Japan), through distribution partner Wild Bunch International, as part of the company’s continued efforts to grow its best-in-class library of animated films.

For the first time ever, this expansive catalogue of Studio Ghibli films will be subtitled in 28 languages, and dubbed in up to 20 languages. This partnership will enable fans in Asia Pacific, Europe, Middle East, Africa and Latin America to enjoy beloved classics, such as Academy Award®-winner Spirited Away, Princess Mononoke, Arrietty, Kiki’s Delivery Service, My Neighbor Totoro, and The Tale of The Princess Kaguya, among others, in their native languages.

Producer Toshio Suzuki at Studio Ghibli said, “In this day and age, there are various great ways a film can reach audiences. We’ve listened to our fans and have made the definitive decision to stream our film catalogue. We hope people around the world will discover the world of Studio Ghibli through this experience”.

Aram Yacoubian, Director of Original Animation at Netflix, added, “This is a dream come true for Netflix and millions of our members. Studio Ghibli's animated films are legendary and have enthralled fans around the world for over 35 years. We're excited to make them available in more languages across Latin America, Europe, Africa and Asia - so that more people can enjoy this whimsical and wonderful world of animation.”


Below is the release schedule for Studio Ghibli films on Netflix:

Founded in 1985 by Japanese animated film directors Isao Takahata and Hayao Miyazaki, Studio Ghibli has produced twenty-two feature-length films garnering worldwide acclaim from audiences and critics alike. Cultivating a creative force of talented directors, animators, and storytellers under the revered brilliance of Takahata and Miyazaki, Studio Ghibli films have been praised for their originality, dazzling animation, and epic storytelling becoming a beloved part of Japanese popular culture. Hayao Miyazaki’s Spirited Away won the Academy Award® for Best Animated Feature of 2002 and in 2005 Miyazaki was named one of “the most influential people” by TIME Magazine.