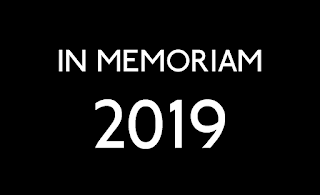 Normal service resumes tomorrow but, for today, Susan Omand takes a look back at a few of those we lost in the past year...

This is always a bittersweet article to write. There are always big names in film, books, comics, gaming and TV whose deaths hit the headlines throughout the year, generating outpourings of grief and remembrance from the public. Some of these are remembered here but I also like to highlight the lesser known deaths whose work during their lifetime made no less of an impact even though their names go often unremembered. This is by no means an exhaustive list though, there are sadly always too many, it’s just the ones I found interesting or memorable in some way.

Clive Swift, 82, English actor (The National Health, Keeping Up Appearances, A Passage to India) and songwriter.

Eddie Jones, 84, American actor (Lois & Clark: The New Adventures of Superman, A League of Their Own, The Terminal).

Franco Zeffirelli, 96, Italian film and stage director (Romeo and Juliet, Jesus of Nazareth, The Taming of the Shrew)

Gerard O'Neill, 76, American investigative journalist and news editor (The Boston Globe), Pulitzer Prize winner (1970), co-author of Black Mass: The True Story of an Unholy Alliance Between the FBI and the Irish Mob

Jean Heywood, 98, British actress (When the Boat Comes In, Our Day Out, Billy Elliot)

Kaye Ballard, 93, American actress (The Mothers-in-Law, The Doris Day Show) and singer ("Fly Me to the Moon")

Kenny Lynch, 81, English singer ("You Can Never Stop Me Loving You"), actor (Carry On Loving, The Playbirds) and entertainer.

Mark Medoff, 79, American playwright (When You Comin' Back, Red Ryder?, Children of a Lesser God) and screenwriter, Tony winner (1980)

Max Wright, 75, American actor (The Dad in ALF, Reds, All That Jazz)

Stephen Moore, 81, British actor (A Bridge Too Far, The Last Place on Earth, Adrian Mole's dad in the TV series)

Vinny Vella, 72, American actor (Casino, Ghost Dog: The Way of the Samurai, The Sopranos) and comedian

Information from Wikipedia and IMDb