Raturday - Film: The Secret of NIMH 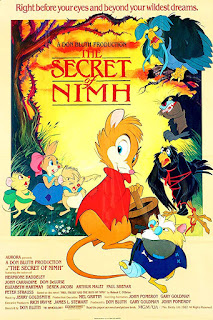 For our rat-themed day, Alwyn Ash has a secret to share...

Oh, rats! It's the Secret of NIMH. And what a nice little secret it is, too. It's strange how my childhood was blessed with some animated feature films while others scarcely made on impact on me at all. For example, movies such as Pinocchio (1940), Dumbo (1941), One Hundred and One Dalmatians (1961), and Snow White and the Seven Dwarfs (1937) failed to win a place in my heart; whereas Robin Hood (1973), The Black Cauldron (1985), The Fox and the Hound (1981), Yellow Submarine (1968) and Watership Down (1978) firmly planted themselves into my all time list of favourites. Oh yes, and Mickey's Christmas Carol (1983) - no Christmas is complete without a viewing of this particular gem! I'm uncertain why some just didn't make the grade for me. One animation that did capture my imagination back then was a dark feature called The Secret of NIMH. Having a look at the cast list just now I'm surprised by some of the names attached: Derek Jacobi, Wil Wheaton and Shannen Doherty are three that jump out at me.

The film was adapted from a story by American author Robert C. O'Brien, Mrs. Frisby and the Rats of NIMH, first published in 1971. I've never read the book, and so this article focuses solely on the movie. I've also discovered that a follow up to the 1982 animation titled The Secret of NIMH 2: Timmy to the Rescue had been released in 1998, but I'll likely ignore this fact; also seeing as original director Don Bluth wasn't even involved in this second project, it makes ignoring the sequel that much easier. So what was I talking about again?

Oh yes, The Secret of NIMH. Though a children's adventure, there is a far more serious subject matter in NIMH's DNA for grown ups: mental health. This is how I remember the movie as a kid: a little lady mouse meets a clumsy crow, her son is ill and so she needs medicine, and there are some mean rats; there was also a magical amulet. 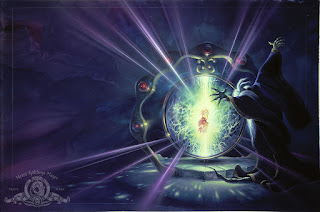 Now from my adult perspective: A mouse called Mrs. Brisby needs medicine for her ill son (who has pneumonia) and so visits Mr. Ages, a friend of her now dead husband. During her return journey home, Brisby encounters a very clumsy but friendly crow named Jeremy, who is all tied up and in need of a little help to get untangled. This is the first time we encounter a cat named Dragon, which belongs to the owners of the farm, as he attempts to attack them both. We learn that Brisby and her family must leave their house before the farmer, Mr Fitzgibbon, starts plowing. With Timothy, her son, sick, he needs time to recover without being moved. The farmer, however, brings his plowing forward and so Brisby needs help. This is where the rats come into the picture.

Through a backstory we discover how both her husband and the rats became intelligent: they all live a relatively Human-like existence now, and steal much of what they need from the Humans. Electricity and other technology is becoming common place in their lives. Ever wondered what NIMH refers to? National Institute of Mental Health. It seems that the rodents were "lab rats" and that the experiments boosted their intelligence so greatly that they developed the ability to understand and reason. Following an escape from the laboratory, they built homes and a new way of life. As with any society, there is both good and bad, and one character who you'll love to despise is Jenner, a ruthless, power-hungry rat.

It's nice that The Secret of NIMH received widespread critical acclaim, and has remained in the hearts of many fans over the decades. It's even been applauded as a wonderful adaptation of the original book. It even won a Saturn Award for Best Animated Film of 1982.

Though Robert C. O'Brien died in 1973, his daughter Jane Leslie Conly penned two sequel books: Racso and the Rats of NIMH (1986); and R-T, Margaret, and the Rats of NIMH (1990). Thankfully, neither of these are connected to the 1998 The Secret of NIMH 2: Timmy to the Rescue animation. Just me? Well I'm happy to say that the majority of critics and fans disliked director Dick Sebast's version; it's been described as missing its predecessor's "heart or craft". Another absence from NIMH 2: TTTR is the remarkable musical talent of Jerry Goldsmith. Let's face it, the man behind compositions for films such as Alien, Rambo, Star Trek, Explorers, Poltergeist, Gremlins, Capricorn One, Logan's Run and Planet of the Apes will always be a hard act to follow.

Heartwarming and magical, The Secret of NIMH not only had a talented director, composer and voice cast, but it is also timeless. I love it as much today as I ever did in 1982 and beyond.