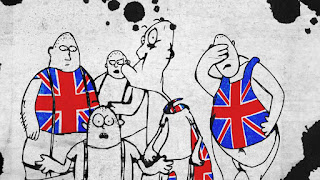 Today seemed appropriate to share a reminder of Susan Omand's thoughts from a couple of years ago on the short film Brexicuted by Chris Shepherd...

Done in the style of animated vox pop "interview" responses allegedly taken the day after the UK voted to leave the EU, Brexicuted is presented as a series of short soundbites from characters around Britain (well, around England.) This was a clever way to cover a variety of viewpoints in a short space of time without the need for rambling links and the characterisation, both in terms of the monologues, voices and settings, worked well to make the characters appear familiar. I don't know how the film-makers were able to resist the temptation to caricaturise real famous people/politicians, however they still manage to encapsulate a broad range of stereotypical characters and well-known Brexit slogans/beliefs/imagery into a brief 6 minutes.

The art style also really suited the content. The use of blotchy pen and ink line drawings, with minimal but well chosen colour highlights and handwritten lettering gave the film the feel of political cartoons in newspapers and this sharpened the satire for me as it made the social commentary seem more immediate and relevant. I also really enjoyed spotting the little details in the background of some of the set pieces as there's a lot of subtle humour there too. As a concept, I can see the style working as a recurring "satirical comment" slot in a UK equivalent of the American late-night talk shows - it wouldn't work in America because the humour is definitely British.

From the elderly lady (voiced by the ever-wonderful Jean Boht) who fondly remembers the war "when Britain was run by great men" to the bunch of flag-draped skinheads (who, incidentally, I thought were the funniest group of all of those featured in the film) mouthing off about the "muslamics," it's pretty clear which side of the Brexit fence the film creators set themselves because this is anything but an impartial look at the state of the country. However, film-making, like any art form, should be used as a way of expressing an opinion on the world so I'm very pleased to see that they are sharing their own views on the state of Britain. I like to think that it is no coincidence either that there is European, specifically French, involvement in the film's production.

I don't know... bloody Europeans, coming over here, making us laugh and keeping us entertained...