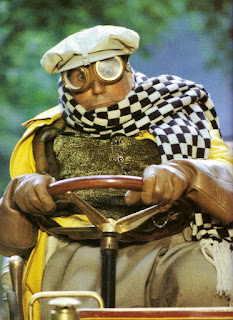 Terry Jones rides off into the sunset, probably blowing a raspberry. The passionate heart of Monty Python, with his every-tumbling of words, seemingly inexhaustible energy, his scatter-gun creativity and his sheer delight in whatever he was engaged in.

Even when suffering from the early form of dementia that contributed to his passing, his best friend and long-term collaborator Sir Michael Palin was telling tales of his fierce striding on what were supposed to be gentle walks and his ability to still laugh when he heard jokes he'd written.

It seemed to be that Terry was the most centred of the Pythons, never uncomfortable in whatever magical and surreal scene he popped up in throughout his career; be he naked, in drag, or impersonating an anthropomorphic toad. He jumped from television to film to radio to stage to page and all the way back again. His drive to educate those around him and himself, in an entertaining and engaging way (children and adults alike), was astonishing and you've only got to look at his output as a screenwriter, director, actor, author and poet to see the sheer breadth of range he had.

He seemed like he was fizzing, like an effervescent bottle of pop - ready to be shaken up until you let the lid off because of the force building up underneath.

Oddly, I think his work outside of the show that made him famous, as an ex-Python, was a true showcase of the man. He clearly could turn his hand to anything and make it relatable to everyone else.

For me, his perfect rendition as Toad of Toad Hall, in his warm and witty film adaptation of The Wind in the Willows, fitted him more smartly than any other role. Like Toad, he seemed to be ever inquisitive, ever naughty, ever ready to lead the charge, and surrounded by friends who loved him despite of any misdoings or false steps.

The world started to lose his shine a fair few years back and it was a cruel fate that his illness clawed away at his thought and speech. But, he crammed more into a lifetime than the majority of men do for his age and he'll no doubt be reunited with another bereft of life Python in the form of Graham Chapman - for if anyone should have Chapman's 'catchphrase' directed at him, it was Terry Jones.

And he has stopped that but he'll never not be silly.

Republished with kind permission of Barnaby