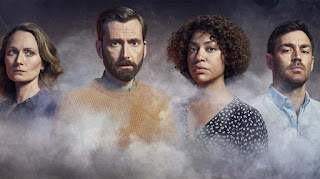 Ahead of the start of their new crime drama Deadwater Fell next weekend, Channel Four have released an interview with its writer and creator Daisy Coulam...

When a seemingly perfect and happy family is murdered by someone they know and trust, the small Scottish community they call home becomes riven with doubt and suspicion as those closest to the family begin to question everything they thought they knew about their friends...

Written and created by Daisy Coulam (Humans, Grantchester), the drama follows two families in the fictional village of Kirkdarroch in the aftermath of a horrific crime. As much as it is an exploration of the anatomy of a terrible crime the series is equally a forensic dissection of two relationships – Kate and Tom, Jess and Steve. BAFTA and NTA award-winning David Tennant (Broadchurch, Dr Who, Good Omens) stars as Tom Kendrick. The local GP, a trusted, admired and much-liked member of the community Tom is a doting father to three little girls, a seemingly loving husband whose marriage to Kate, played by Anna Madeley (Patrick Melrose, The Crown, Utopia) appears nothing short of perfect. Kate is a beloved local teacher who works at the primary school alongside her best friend, and closest confidante, Jess Milner.

Jess, played by Cush Jumbo (The Good Fight, The Good Wife, Vera), used to be a bit of an outsider, someone who could never really settle down. But when she met Steve 6 years ago, she quickly moved to Kirkdarroch and made a home with him. She helps him look after his two sons from his previous marriage with whom he shares custody with his ex. Steve, played by Matthew McNulty (Versailles, Cleaning Up, The Terror), was born and raised in Kirkdarroch. A Police Sergeant, he’s previously not had to deal with much crime in the sleepy village and their happy life together is only marred by their struggle to have a child of their own….

But in one night the illusions of happiness and contentment are shattered as the community is drawn to Kate and Tom’s home in the forest by the flicker of flames and the smell of smoke. Amid the confusion Kate and her three children are found dead, and Tom, who is found alive, is rushed to hospital. It soon becomes apparent, however, that Kate and her children weren’t killed in the fire and the village realise that something unspeakable has happened. As the fingers of suspicion point first to Tom, then to others as more details of that night emerge, Jess becomes desperate to understand what could have caused such a tragedy, and what secrets lie at the root of this terrible act…

Here's the interview with Daisy Coulam:

What is Deadwater Fell about?

Deadwater Fell is about a tragedy that occurs in a remote Scottish village. It’s seen through the eyes of two families, the Kendricks and the Campbells. As we unpeel the layers of what’s gone on we learn things we don’t expect about those families. It’s about what happens behind closed doors, how we look at other people’s lives and think they’re perfect when they’re anything but.

What made you write the series?

I think firstly it was a love of true crime. I’m really drawn to true crime documentaries and stories, but I find you get more of a sense of the perpetrators than the victims. I wanted to understand why some of these crimes happen and to address the importance of the victim as the real person they are.

Is it based on any real crimes in particular?

We had a forensic criminal psychologist to advise us on the story and she pulled together a number of examples for us and explained the behaviours and character traits of people that commit such crimes. So, it draws on true themes and a lot of research, but we’ve totally created our own story.

You are the creator of Grantchester, a hugely popular crime drama, but a period piece set in the 1950’s. Did you have to think differently when approaching a modern-day crime series?

Interestingly I think Grantchester and Deadwater Fell, although they’re completely different shows, cover similar themes, beyond the crimes and solving them. I’m interested in crime not just as a shocking act but as a psychological study. So, in Grantchester and in Deadwater Fell we’re looking behind the tragedies to the truth, what causes these events, the real people involved and the impact upon them. That’s kind of my aim with both the shows.

What research did you do when creating the drama?

We spoke to a criminal psychologist, we spoke to a police adviser and other professionals. Though we wanted the series to be realistic, it is a fictional drama and we wanted to do something that was original and touched on the themes you often see in a slightly different way. We weren’t just following tropes, I suppose. We wanted to be thought provoking and to shine a new light on some of the issues that viewers see throughout the series. 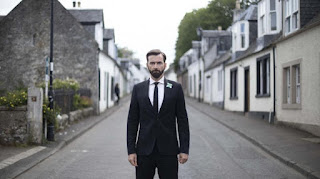 You have such an incredible cast at the centre of the series. Was it written with them in mind?

No, it wasn’t actually. The moment we got David Tennant it was clear it was always David Tennant’s role. He brings so much to the part and the series as a whole. But like with most dramas I wrote it a year before it got the greenlight. In a way it was just an exercise in writing something with themes I was quite passionate about, so no one was attached. We’ve ended up with one of the most talented and incredible casts anyone could ask for.

Deadwater Fell has a hugely female production team behind it, with a female producer, two female exec producers, a commissioning editor, director and of course yourself. What was that like to be part of?

It was great. I’ve worked with Emma Kingsman-Lloyd and Kudos a lot, on Grantchester. Some of these women were my friends already and it was great to work with them again. It was pretty inspiring to work with a female director and a female DOP as well. It felt quite special, I suppose, to work with that number of women at the top, as it’s not something that is hugely common. Although in all honesty I don’t think it’s any different from working with men. It’s about relationships and communication.

The series is set in Scotland and filmed purely on location there. What was the reasoning behind that?

Well, the village itself sort of becomes its own character. Kirkdarroch is a very isolated and remote place surrounded by forest and it’s stunning but there’s something symbolic about it that represents our story really: the idyllic look of it hides something more sinister. A lot of our characters are isolated with secrets, or isolated from loved ones. The village itself and its outer beauty represents that.

What are the main themes of the series?

There are many that come out throughout the series, I don’t want to spoil it too much, it’s so hard to elaborate without giving things away. One of the main themes that underpins it all is the relentless perfectionism we all struggle with in our lives. Many of us believe we have to live this Instagram-ready life. The reality is that nobody’s life is that perfect. It’s a look at that world, how we look at other people and think they’ve got it all, but do they really have it all? It’s sort of about the notion of evil and what makes someone evil. I’m quite interested in crimes that get called evil because all these crimes are committed by humans. It’s humans who commit these acts. Why are we so afraid to say that? Why are we afraid to study that and try and unpick what makes people conduct these terrible acts?

The first of four weekly one hour episodes of Deadwater Fell starts at 9pm on January 10th on Channel 4. Viewers who miss an episode can catch up on All 4.

All images and information courtesy of Channel 4.
Email ThisBlogThis!Share to TwitterShare to Facebook