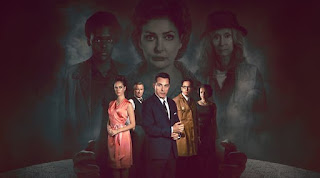 The Pale Horse is the latest Agatha Christie story to be adapted for BBC One by Bafta-nominated writer Sarah Phelps, and features a stellar cast. Ahead of the first episode next weekend, the BBC have released a short interview with its star Rufus Sewell...

London, 1961. Mark Easterbrook (Rufus Sewell) has everything a man could dream of - he’s rich, successful and popular, with a beautiful new wife (Kaya Scodelario) and perfect home. But scratch beneath the surface and he’s still grief-stricken by the loss of his first wife Delphine (Georgina Campbell). When Mark’s name is discovered on a piece of paper in a dead woman’s shoe everything starts to fall apart for him.

Why did Jessie Davies (Madeleine Bowyer) die, why is Mark’s name on a piece of paper in her shoe, and who are the other names on the list? Detective Inspector Lejeune (Sean Pertwee) interviews Mark and mentions that the names Tuckerton and Ardingly were also on the list. Mark has a connection with Thomasina Tuckerton and David Ardingly - and Thomasina is also dead…

As Mark tries to work out why he is on the list and what it means, everything seems to lead back to the village of Much Deeping. His first wife, Delphine, visited the area on the day of her death. Much Deeping seems to be an idyllic English village, but it is also a place of old traditions and strange beliefs, a place of witches, curses and spells. Jessie’s employer Zachariah Osborne (Bertie Carvel) tells Mark that witchcraft played a part in Jessie’s death, which Mark angrily rejects. But then he is sent a mysterious corn dolly. As more people named on the list are found dead, Mark starts to fear for his own life and sanity.

Mark is consumed with paranoia, fearful that his life is at risk and that the perpetrator is someone known to him. Mark feels his own death treading on his heels, breathing down his neck. To make matters worse, Detective Inspector Lejeune seems to be increasingly suspicious of him, and Mark feels even more alone.

He’s determined to find a rational explanation because there has to be one - this is the 1960s not the Dark Ages. Past and present collide for Mark as his investigations uncover the ties between Delphine and the trio of 'witches' (Sheila Atim, Kathy Kiera Clarke, Rita Tushingham) at Much Deeping, putting his relationship with second wife Hermia under great strain.

Terrified, Mark becomes hell-bent on uncovering the nature of the witches’ powers and their work at The Pale Horse. With each passing day, each disquieting moment, each tormented, terrifying night, Osborne’s beliefs seem less fantastical and more plausible. Mark starts to believe in the craft, in the dark arts, in the witches’ peculiar skills. If they are truly as powerful as they seem, can they save him from his nightmares, before whoever wants him dead catches up with him? How far will he go to save himself?

Screenwriter Sarah Phelps said "Written in 1961, against the backdrop of the Eichmann Trial, the escalation of the Cold War and Vietnam, The Pale Horse is a shivery, paranoid story about superstition, love gone wrong, guilt and grief. It’s about what we’re capable of when we’re desperate and what we believe when all the lights go out and we’re alone in the dark."

Tell us the story of The Pale Horse.

The Pale Horse is actually an old village pub where three women who are rumoured to be witches live. There are a series of deaths that are inexplicable until they seem to be brought together by a list of names found in a dead woman's shoe. Mark’s name is on this list with a question mark after it, and he doesn't know why. In his past he lost his first wife and that haunts him. When she died he remarried very quickly after which was his way of coping with grief. That is certainly how some of his friends see it. This is the story of tracking down what's behind these murders, why they're connected and how and why they are connected to him.

Can you describe your character?

Mark Easterbrook is a man of his time. He comes from a very comfortable background, is used to wealth and has extremely good taste. He works in high-end antiques and has his own, very large store in a smart part of town. He likes flash motorcars and is a society person and is relatively well known. He has a certain confidence about him, which carries him quite far. He got married quickly to a very young and beautiful woman. To all intents and purposes he is someone who makes his life look good from the outside, but on the inside it’s a different story. He has a side to him that you wouldn't necessarily spot.

What drew you to the script?

It has a viciousness to it, a dry, witty nastiness which appealed to me. It also has a surprisingly dark turn. In terms of genre, it’s a little bit indistinct. You may think that it’s one thing, and it may or it may not turn out like that. I was really surprised by where it went. I’ve always loved watching Agatha Christies and I’d never made one, so I was delighted to have the script sent to me.

Which scenes have you found particularly memorable to do?

Filming scenes with Henry Lloyd-Hughes has brought out such a different aspect of my character because we have a bit of fun together - our characters go out on the town together. It’s a very different feel with those scenes and they were great fun to do. All of the actors are so fantastic - Kaya, Georgina and the three brilliant women playing the witches! And Bertie Carvel was really wonderful, he’s a completely different character to who Mark Easterbrook is. 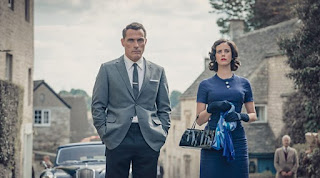 Which other characters do you find intriguing?

Hermia (Kaya Scodelario) is an interesting character because you meet her at a certain stage in their relationship, where it’s very acidic between them and there is a lot of tension. You can tell that she’s lonely and haunted. They’re very separate, but there is a desire there, on at least one of their parts, to make it closer. Kaya was wonderful to work with.

How do you think the show will feel different to a usual whodunit?

It’s like reading something that’s a cross between An Education, The Wicker Man and Jacob’s Ladder. There’s an element to this story that is really quite surprising. It reminded me of a phrase Hitchcock once made about one of his film scripts: "It’s a nice, nasty little piece."

What has Sarah Phelps brought to this adaptation?

Sarah has eeked out the underlying energy, the twists and the turns that this story takes slightly more than in the original. People think they know this character but I don’t think they will after they’ve seen this. Sarah’s dialogue and scene descriptions are fantastic; it’s a delicious read for actors. It’s so well written.

What’s it been like to be transported back to 1961?

England in this period is new to me - it feels like a different world. It’s an exciting period to explore with great suits! It’s interesting for me because I come from a very different background to Mark and I really enjoyed slipping into that. I often find myself playing characters like this when the truth is so very different.

What is it like being directed by Leo Lonsdale?

This has been a great experience and quite intense in a way because we had to start with really big scenes. I like that because if you start with an incredibly important scene on your first day, day two is easier than usual because you’re already really blooded. I liked working with Leo the director very much, I could trust her. She’s really young and really talented.

Why should people tune in to The Pale Horse?

It appears to do everything it says on the tin, but look closer and it is breaking the mould. It’s set in hip London of the early 1960s which I don’t think audiences ever really associate with this genre or Agatha Christie, so it’s familiar yet strange. What I’ve always loved about Agatha Christie is the misfits she writes; she creates these wonderful, central characters who are both odd and so wonderful.

Episode one comes to BBC One on 9 February at 9pm to 10pm and the whole series will be available on Amazon Prime from March 13th.