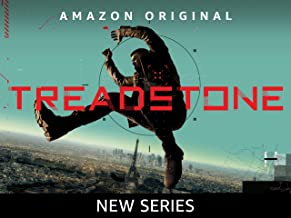 "You see people, I see assets." We see that Steve Taylor-Bryant is watching Treadstone on Amazon Prime...

Anything that starts with East Berlin immediately has my attention and when that show happens to be based loosely on a situation from the Jason Bourne films I have no choice but to sit up and take notice. And so I’m watching Treadstone on Amazon Prime, USA Network across the pond I believe.

I’ll get to my overall thoughts in due course and I’ll explain the basic plot, but I have to start by stating how much I’m appreciating the sheer amount of money being spent on television shows in this day and age because the investment by the bean counters is being rewarded by the time investment of viewers. A lot of the shows I’ve enjoyed in the last few years wouldn’t have worked as well without a budget to back up the creative team's scope and vision. I say this because I’m the first to bitch about non-investment, I’m the first to condemn a network or studio if they fumble a great idea trying to produce it on the cheap; Treadstone does not look cheap, Treadstone does not look like they spared any expense especially in the fight training aspects of production. Treadstone does not look like a cheap Bourne rip off, which is good because it really is its own show that just borrows an idea from the books and films and then builds its own world within that idea.


So to Treadstone. The opening scene of the brainwashing of an agent in East Berlin in the 1970’s is cinematic and action filled but also important for two reasons. 1 - this is before Jason Bourne so you now know he wasn’t the first and wasn’t the only one, and 2 - you are getting subtitles when they are needed which makes the show feel more authentic for me but will definitely piss off those of you that are anti-reading in your entertainment. The rest of the episode takes place in modern day and sees sleeper agents being woken up worldwide with their trigger song Frere Jacques, which I did have to stifle a laugh at, but otherwise the episode sticks to its serious content, introduces those protagonists and storylines that will make up the rest of the season. The fight choreography is superb and filmed very tight on so you get a real idea of what a good kicking feels like if you weren’t me at school. The stunt work is top notch, the locations superb and the casting brilliant mainly because I don’t know many of the actors from other things so I’m not as taken out of the story as I was maybe was during the film series.

This is not just a top espionage television show with incredible action set pieces. The writing is superb offering multiple threads of stories and as a viewer you aren’t quite sure of which ones are vital at the moment which is gripping and with exception of Treadstone as an idea being the basis for the show it’s nothing like the films and most certainly stands on it owns merit. This is of course being written after episode 1 and of course it may not hold up, that’s always a possibility, but I get the feeling in head and gut that it will be and I’m about to get hours of entertainment.