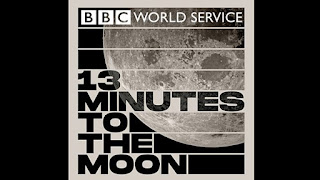 The BBC World Service’s award-winning podcast 13 Minutes To The Moon is returning with a second season, telling the extraordinary story of Apollo 13....

It should have been the third Moon landing, but after an explosion, it almost ended in tragedy. The six-episode season begins with the ‘six minutes of silence’, when the crew re-entered the Earth’s atmosphere having survived four days in a stricken ship with dwindling power and oxygen supplies. As the seconds ticked by and the world waited for radio contact to be re-established, mission control began to fear the worst.

Co-written and presented by Kevin Fong, the podcast will feature in-depth interviews with Apollo 13 mission’s commander, Jim Lovell and his family, astronaut Fred Haise, and key figures from NASA’s mission control in Houston who fought to prevent disaster. The theme music is written by Grammy, Golden Globe and Academy Award winner Hans Zimmer and Christian Lundberg for Bleeding Fingers Music. The podcast will mark the 50th anniversary of Apollo 13 in April.

Presenter Kevin Fong said “It was fantastic to be able to take a deep dive into the Apollo 13 story. It’s a thing of legend and I wanted to understand what it took to pull something like that off. How do you fight back from an event that catastrophic? How do you lead a team through something so apparently hopeless? This is the story of people and state-of-the-art-technology stretched to their very limits; of a crew working a problem, and refusing to ever give up. In the story of Apollo 13 there are some of the best examples of leadership and teamwork I have ever seen. There are lessons here for all of us. It was a huge privilege to have the chance to talk with the astronauts, flight controllers and engineers who were there and made this thing happen.”

Mary Hockaday, Controller, BBC World Service added “A huge hit with podcast listeners around the world, the first season of 13 Minutes To The Moon told the story of Apollo 11’s first Moon landing and showcased the ambition of BBC World Service podcasts to take audiences on an immersive audio journey. Now the podcast is back to give the same treatment to the extraordinary story of Apollo 13 and the astonishing efforts which brought the astronauts safely back to earth.”

Contributors this season include:


Astronaut Jim Lovell, commander of the Apollo 13 mission, and members of his family: his wife Marilyn, daughter Susan and son Jay.

Flight controller John Aaron who led the efforts to resurrect the command module spacecraft that Lovell’s crew needed to re-enter the Earth’s atmosphere and splashdown.

Sy Liebergot, who was the flight controller under the greatest pressure when the Apollo 13 service module exploded. It was his request to switch on fans in an oxygen tank that sparked the explosion which almost killed the crew.

Joe Kerwin, astronaut and capsule communicator who gave the crew their instructions on how to build a make-shift device to prevent them suffocating in their own carbon dioxide and talked them up to the point of their reentry into the Earth’s atmosphere for splashdown.

This second season is produced and co-written by Andrew Luck-Baker, who was Series Producer on season one.

The first episode of 13 Minutes To The Moon season 2 will be available for download on Monday 9 March, with new episodes released weekly. The sixth episode will be available on Monday 13 April and two extra episodes featuring the production team’s full interviews with Apollo 13’s commander Jim Lovell and flight controller John Aaron will be released to mark the 50th anniversary of the crew’s return to Earth on Friday 17 April. The podcast is available on BBC Sounds in the UK and most podcast and audio streaming platforms around the globe. Together with films and archive material, the podcasts will be available here.

The series will also air on BBC World Service radio from Wednesday 11 March in weekly instalments.