Audio - What if: Big Finish Doctor Who 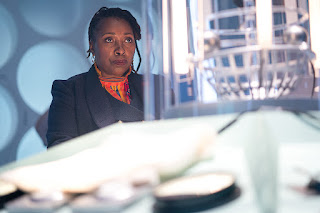 With a "slight" [mega - Ed] spoiler if you haven't watched the Fugitive of the Judoon episode yet from the latest series of Doctor Who, Paul Robinson speculates "What if" Big Finish decided to give a certain character the box set treatment...

Episode 5 of the current season of Doctor Who, 'Fugitive of the Judoon', introduced the audience to a new, and heretofore unknown, incarnation of the Doctor. The placement in the Doctor's chronology is uncertain but the clues indicate an earlier incarnation than Thirteen but after escaping Gallifrey sometime prior to the start of the series.

One current fan theory is that this new version of The Doctor, played by Jo Martin, is between Patrick Troughton and Jon Pertwee, as this is the only regeneration we did not see on screen. Fan theory refers to this period between The War Games and Spearhead from Space as Season 6B and often places the Second Doctor and long-term companion Jamie McCrimmon's appearance in The Two Doctors in this gap.

Some of the books have the Doctor and Jamie working for the Celestial Intervention Agency (or CIA) in this gap, which would correspond to the Jo Martin Doctor working for Commander Gat. As a television series about the character is extremely unlikely, we should turn to audio play company Big Finish to fill in the gaps, not unlike their War Doctor box sets with John Hurt.

The War Doctor and Eighth Doctor box sets are a good template for this hypothesized exploration - box sets of four one-hour long episodes each, with an arc within each box set. I would take the first box set to show the regeneration from Troughton to Martin at the end of the first story, with Frazer Hines' Jamie returning to accompany both versions.

Commander Gat (Ritu Arya) would appear, to give the Doctor their assignments: The Doctor would be charged with tracking down dangerous Gallifreyan criminals, with the James Dreyfus version of old nemesis The Master being the focus of the first box set - and therefore after a regeneration in the first story, a confrontation with the Dreyfus Master would come in the finale.

In between, we would have two reasonably standard Doctor Who escapades. The Martin Doctor - as tour guide Ruth - talked in the TV episode about Henry III having his coronation at Gloucester. It would be remiss of Big Finish not to take the opportunity to have the Martin Doctor meet Henry III, though not necessarily during his coronation - it would also be a fantastic opportunity for a pure historical episode, which weren't uncommon during the Hartnell and Troughton Era, which would leave the third episode as that other early Doctor Who staple story type - the base under siege, much like The Underwater Menace or The Macra Terror.

Whilst it would be tempting to have the Martin Doctor and Jamie travel alone, early Doctor Who rarely - if ever - had the Doctor travel with only a single companion, which didn't become common place until Pertwee. And, given that Big Finish are fond of using characters who were introduced with one Doctor against an earlier Doctor, there is a temptation to have Jamie and the Martin Doctor joined by someone like Emma Campbell Jones' Cass from "Night of the Doctor", which would make her eventual fate even more heart breaking - or Zawe Ashton's Journey Blue with the base under siege being the spaceship Aristotle, the setting of TV episode, "Into the Dalek".

Cass and Journey would presumably be under the same license as the War Doctor, Lady Christina, Jenny and the NuWho UNIT team; all of whom are characters that Big Finish have extrapolated out to great acclaim - so it's not entirely unreasonable to think that they might be able to develop Cass (or whomever), especially as she could become the main companion for the Martin Doctor for the Second box set forwards.

Because there would be some mileage in this series, with Big Finish having a pattern of four box sets, with four episodes in each box set, per story arc. Each box set would feature the Doctor in pursuit of a different Gallifreyan criminal - The Dreyfus Master would be first, perhaps followed by the Redmond Rani, a prior incarnation of The Eleven, with the final box set segueing nicely into the events of the TV episode 'Fugitive of the Judoon'.