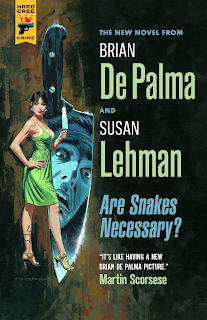 17th March sees the release by Hard Case Crime of the debut novel from legendary filmmaker Brian De Palma (director of Scarface, Carrie, The Untouchables, Dressed to Kill, Body Double, Blow Out, and the original Mission: Impossible) and Susan Lehman, a former editor of the New York Times and author whose writing has appeared in the Washington Post, The Atlantic Monthly, Vogue, The New Yorker, and Spy magazine.

When the beautiful young videographer offered to join his campaign, Senator Lee Rogers should've known better. But saying no would have taken a stronger man than Rogers, with his ailing wife and his robust libido. Enter Barton Brock, the senator's fixer. He's already gotten rid of one troublesome young woman - how hard could this new one turn out to be?

Pursued from Washington D.C. to the streets of Paris, 18-year-old Fanny Cours knows her reputation and budding career are on the line. But what she doesn't realize is that her life might be as well...

A female revenge story set within a blistering political satire, the title is a reference to Preston Sturges’ classic film The Lady Eve (where Henry Fonda is seen reading a book called Are Snakes Necessary?), and the novel contains nods to some of De Palma’s best-known cinematic touchstones, including encounters with a film crew in France that is engaged in remaking Alfred Hitchcock’s Vertigo.

“It is a great privilege to work with Brian and Susan on this book,” said Hard Case Crime founder and editor Charles Ardai, “and to welcome a filmmaker of Brian De Palma’s caliber into the Hard Case Crime fold. This is not just a great crime story, it’s a sharp, ruthless look at the state of affairs – both political and extramarital – in our turbulent modern era.”

Are Snakes Necessary? is published by Hard Case Crimes on 17th March