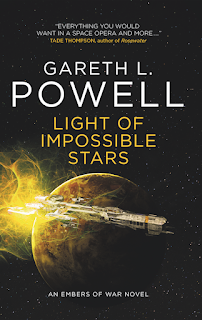 Delighted at the news of Gareth L Powell garnering several nominations in this year's BSFA Awards shortlist, Titan Books also announce the publication next week of his latest novel Light of Impossible Stars...

Following on from 2019’s Fleet of Knives, Light of Impossible Stars is the explosive third and final act in Powell’s BSFA award-winning series.

Low on fuel and hunted by the Fleet of Knives, the sentient warship Trouble Dog heads to the Intrusion—an area of space where reality itself becomes unstable. But with human civilisation crumbling, what difference can one battered old ship make against an invincible armada?

Meanwhile, Cordelia Pa and her step-brother Michael eke out their existence salvaging artefacts from an alien city. But when Cordelia is snatched from her home, she begins a journey that will help her understand the strange songs she hears in her head and the strange things that happen around her. What extraordinary affinity does she have for this abandoned alien technology, and how can it possibly help the Trouble Dog?

Gareth L. Powell was born and raised in Bristol, and his early mentors included Diana Wynne Jones and Helen Dunmore. His novels have twice won the BSFA Award, and been finalists for both the Locus Award in the US and the Seiun Award in Japan. He is probably best known for his acclaimed ‘Trouble Dog’ space opera series, which includes the novels Embers of War, Fleet of Knives and, now, Light of Impossible Stars. He is a popular guest and speaker at conventions and literary events, and can often be found on Twitter @garethlpowell giving free advice to aspiring authors.

Light of Impossible Stars is published on 18th February by Titan Books.