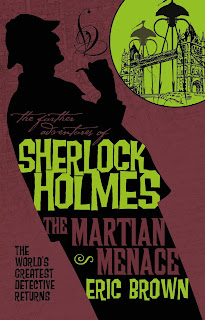 The world’s greatest detective returns in a brand-new mystery as Titan Books announce the publication next week of The Further Adventures of Sherlock Holmes: The Martian Menace by Eric Brown...

For the second time in human history, Martian invaders occupy planet Earth. After a common terrestrial virus thwarted the first deadly invasion, another Martian armada arrived six years later to make peace. Now, mankind enjoys unprecedented prosperity due to the aliens’ scientific wonders and technology, and an entente exists between the two races. But when Sherlock Holmes and Dr John Watson are called upon to investigate the death of an eminent Martian philosopher, they unravel an intricate web of betrayal and murder that leaves no one – human or Martian – beyond suspicion…

Eric Brown is the award-winning author of several science fiction novels including Helix, Engineman, Necropath and Buying Time. He also writes the Langham and Dupré mystery series as well as many children’s books, plays and articles. He reviews speculative fiction for The Guardian. Born in Haworth, West Yorkshire, he now lives in Scotland.

The Further Adventures of Sherlock Holmes: The Martian Menace is published by Titan Books on 11th February.