Book - The Near Witch 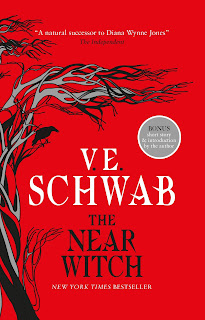 When a young boy, Edgar, vanishes from his home and a stranger who was seen the night before is blamed, locals start a search for them both. Sixteen year old Lexi Harris isn't so sure; for she has met the newcomer and, though he has secrets of his own, it doesn't seem likely that he is guilty of abduction. But what are the voices that speak to her young sister Wren? The fear felt in the village intensifies when a second child goes missing.

I enjoyed reading The Near Witch, the debut novel of author V.E. Schwab. It has a beauty all of its own, and a richness of characters. First up is Lexi, a confident young lady who is more comfortable wearing her father's hunting knife and actually getting involved in the search for missing children than living up to other people's expectations. She lives at home with her young sister and mother. Since the death of her father, she's clearly been "guided" by her Uncle Otto, though she prefers to follow her intuition than be told what to do. She is definitely her father's daughter.

Then there are witch sisters Magda and Dreska Thorne, who are clearly older than anyone else in the village with knowledge and memories that span more time than is possible. But they've lived, and seen things. They're also loners, which makes them suspects of concealing the stranger. If he's not found in the village then where else can he be?

And then there is the stranger himself, just a boy but one whose real name and motives are a mystery; to the villagers and Lexi, at least. But the disappearance of children began when he arrived, so what more evidence do people need to accuse him? If he is indeed being protected by the witches then perhaps they need to be dealt with, too?

I love the themes of isolation and fear, difference and suspicion.

When it comes to books, I know what I like and rarely deviate - which isn't exactly a good thing because there is such richness out there in the publishing world. But from the moment I read the first few pages of The Spook's Apprentice by Joseph Delaney, I was hooked. It was the same with Harry Potter, and Burning Issy by Melvin Burgess. The Near Witch did exactly that, a page turner and an obsession, a wanting to solve the mystery and find out the identity of the stranger; I was Lexi's companion, accompanying her as she resolved to find clues and clear his name. But what if he is responsible?...

Interestingly, this book was first published in 2011. As the author says of its original existence, "...though I tried to shield the fragile candle of its life, it was only a matter of time before the wind of publishing blew through, and snuffed it out". Thankfully she persisted, writing a further fourteen novels in seven years, and the time of The Near Witch came about once more thanks to the team at Titan Books. In March 2019 it was republished, in hardback, with a short story 'The Ash-Born Boy' and an introduction from V.E. Schwab. Now it is available in paperback, and I am glad.

For existing fans of the author it's a real treat to get hands on a fresh copy of this remarkable story. And, like me, if you're new and eager to learn more about this talented writer, then it's certainly a good place to start. I've also been reading Victoria's official website at veschwab.com; and enjoying the blog, which I hope remains intact at wordpress.com and is never deleted - it is such a lovely place to wander and spend time exploring, reading up on the beginnings of The Near Witch's first publication and book signings etc.

I now have a favourite new book, and author.