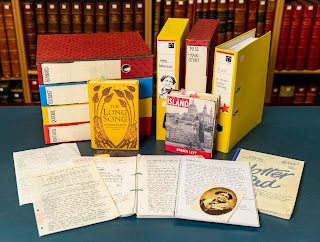 The British Library has announced that the archive of award-winning novelist Andrea Levy (1956 – 2019), has been acquired for the nation, spanning Levy’s literary career from the creative writing workshops she first attended in 1989 to her death in 2019...

Andrea Levy was an internationally bestselling author whose work explored the connected histories of Britain and Jamaica. After earning a degree in textile design and working in graphics, Levy began writing in her mid-thirties, examining the intimate history between Britain and the Caribbean and reflecting the experiences of her own family as the daughter of ‘Windrush generation’ migrants who came to Britain in the post-war period.

Central to the archive is a rich series of working drafts for her five published novels, including Small Island (2004), which won the Orange Prize, the Whitbread Novel Award, Whitbread Book of the Year, the Orange Best of the Best and the Commonwealth Writers’ Prize, as well as Levy’s 2010 follow-up The Long Song which was short-listed for the Booker Prize and won the Walter Scott Prize for Historical Fiction.

The working notes held within the archive demonstrate not only her mastery of characterisation and plot, but also the grand ambition of her fictional project: she viewed her novels as fitting together into a single lineage and the archive contains a clue making an explicit connection between characters in The Long Song and Small Island that many readers may have missed.

Levy’s extensive research into the history of Jamaica and her own family background is integral to the archive, which includes audio recordings of interviews with her mother Amy Levy, used in the writing of Small Island.

There are also short stories, digital records and Levy’s email archive. Correspondence ranges from early rejection letters to letters of support and praise from writers such as Toni Morrison, Margaret Forster, Linda Grant and Joan Bakewell. 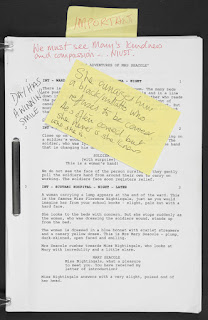 Significantly, the collection contains notes and drafts for unpublished and unrealised work. Included within this are ideas for future novels, such as her intended sixth novel planned to portray the story of a marriage between a black woman and a white man and an unproduced screenplay (pictured above) about the life of Mary Seacole demonstrating the Jamaican nurse’s compassion and determination. Notably, the archive also contains a darkly comic unpublished dialogue, written without expectation that others would see it, in which Levy faces up to her imminent death from cancer with her trademark unflinching honesty.

Other papers present in the archive document Levy’s commitment to issues of representation, diversity and inclusion, particularly as Executive Producer on the screen adaptation of The Long Song and in other collaborations with Lenny Henry, Gary Younge and Baroness Lola Young.

Zoë Wilcox, Curator of Contemporary Performance and Creative Archives at the British Library, said, “Andrea Levy’s voice is present throughout her papers: vivid, alive, often chivvying herself along with notes to self in red pen. Whether writing about role models as diverse as James Baldwin and Julie Andrews, or trying to convince herself that her life was worthy of a memoir, Levy’s modesty, humour, and commitment to confronting the truth are evident throughout. Levy was an extraordinary writer whose literary significance will be celebrated for years to come. Her writing is witty, unfailingly human, and consistently places British-Caribbean history at the centre of our national consciousness. We are incredibly proud that the British Library has acquired the archive for the nation in accordance with Andrea’s wishes. Following a first glimpse of her papers in our 2018 exhibition Windrush: Songs in a Strange Land, this acquisition will offer researchers the opportunity to explore Levy’s life and legacy in much greater depth.”

Bill Mayblin, Andrea Levy’s husband, added “Late in her life it came as a surprise to Andrea that her carefully saved boxes of notes, letters and early drafts could become something as posh-sounding as an archive. But once convinced of it there was only one place she ever wanted that archive to go, and that was to the British Library. Not only had the Library greatly helped her research as a writer, but because much of her work examined British colonial history – a history full of omission and injustice – it seemed fitting, and somehow just, that her archive should finally find a home in a truly national institution. She would be very pleased that through the British Library her work and her story is now owned, and valued, by we British.”

To celebrate the acquisition, items from the archive will be on display in the British Library's free, permanent Treasures Gallery from the end of February. The archive will be accessible to researchers on completion of cataloguing in late 2021.

There will also be a BBC Radio 4 programme titled ‘Andrea Levy: In her own words,’ drawing on this recording and featuring readings from the archive, which is on tonight (8th February) at 8pm.