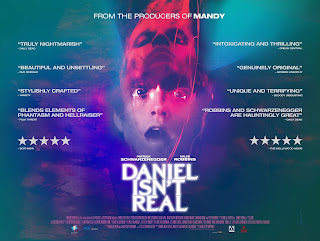 We learn that when Luke was around five years old (Griffin Robert Faulkner) he ran into the street to get away from an argument which was raging between his mum Claire (Mary Stuart Masterson), who was struggling with mental issues, and his unsympathetic dad. A few blocks away he stumbled across the aftermath of a bloody shooting at a neighbourhood café. As little Luke stood staring at a blood-spattered corpse, he was suddenly joined by another little boy called Daniel (Nathan Reid).

Daniel became the lonely child’s constant companion in games of make-believe and imagination. It turned out that only Luke could see Daniel, but her son’s invisible friend triggered no alarm bells for his mother Claire who had her own problems to battle - not until friend Daniel tricked little Luke into almost killing her with an overdose of meds.

Frightened for her son’s wellbeing, Claire ordered Luke to send his ‘imaginary friend’ Daniel away and they finalized the separation by ‘locking Daniel up’ inside Luke’s grandmother’s Victorian dollhouse.

Fifteen years later, grown-up Luke (Miles Robbins) is finding life on a university campus hard to handle and is struggling with the academic demands of his course. He is further stressed when he visits home and realises that his mom Claire is deteriorating mentally, and after a violent breakdown it becomes clear that she must spend time under supervision in a psychiatric unit.

Feeling lost and under pressure, Luke elects to see a psychotherapist, Dr. Braun (Chukwudi Iwuj), who advises him to revisit his childhood traumas and fantasies in order to understand and alleviate his current adult anxieties. ‘Bad move’ thinks the viewer, but sure enough, Luke goes back to his childhood home and unlocks the old dollhouse.

Daniel (Patrick Schwarzenegger) quickly reappears and is now apparently a handsome, charming and confident young man, with nothing but his childhood friend’s best interests at heart.

Luke is seduced by Daniel’s assured demeanour, ingenuity and hip taste in clothes. He’s grateful when Daniel secretly advises him on how to approach and woo attractive girls and helps him with answers to his exam questions. He seems to be a most helpful and supportive companion.

But of course, the viewer is not as trusting as Luke, because we’ve seen Daniel’s creepy behaviour when Luke isn’t watching, or worse, when he’s asleep. We recognise that Daniel is a manipulative creature who clearly has another, less benevolent, agenda of his own.

It isn’t long before Luke starts to get uncomfortable with Daniel’s increasingly domineering directives and begins to glimpse the sadistic perversity underneath Daniel’s handsome mask.

When Daniel orchestrates an encounter with campus wild-child-hipster Sophie (Hanna Marks), he hopes to undermine Luke’s genuine romance with bohemian artist Cassie (Sasha Lane). The evening ends in a frightening demonstration of Daniel’s power, followed by a confrontation and a tragedy that might ruin Luke’s future.

As Daniel’s psychic incursions become more physically intrusive and his demands increasingly outrageous, Luke again turns to his psychotherapist Dr. Braun who insists that Daniel merely represents the darker side of Luke’s own self. He is willing to prove his diagnosis through hypnotism and a form of ritual at Luke’s childhood home. Needless to say, the arrogant Dr. Braun gets more than he bargained for.

In his latest feature Daniel Isn’t Real, director Mortimer exhibits no lack of ambition. Enhanced by Brett W. Bachman’s retro score, he offers an escalating array of shock effects, including morphing bodies, a skeletal demon and visions of a cosmic vortex. Kaet McAnneny‘s production design is first-rate, as is the work of VFX supervisor George A. Loucas and Martin Asles Grand Guignol make-up and creature effects, which belie the film’s modest budget.

What intrigues about Mortimer’s grim yet fevered film, is the act of guessing exactly what ‘Daniel’ might be - is he a paranormal incubus plaguing Luke or just Luke’s schizophrenic hallucination?

Criticism might be levelled at the film’s depiction of mental illness due to the fact that some might read the film as literally ‘demonizing’ mental illness. However, it is also possible to read the film as a commentary on the stigma that still surrounds schizophrenia and other mental illness and perhaps more importantly, it may encourage discussion regarding this difficult subject, as well as other issues that the film touches upon, such as identity, authenticity, empathy and sexual consent.

One of the film’s selling points is the casting of two sons of famous acting parents in the lead roles – Robbins is the son of Susan Sarandon and Tim Robbins and Patrick Schwarzenegger the son of Arnold and Maria Shriver. The young men do their parents proud as they offer two good performances. Robbins brings empathy to his disturbed character, showcasing Luke’s vulnerability. Schwarzenegger’s Daniel is a truly menacing figure that manages to be charming, unsettling and increasingly threatening.

It is a pity that we don’t get to see more of Mary Stuart Masterson and Sasha Lane (American Honey) Luke’s love interest Cassie, as they give sterling support to the two male leads.

I’m not sure the final minutes will satisfy everyone, but for me they came close to tying it up full circle. In Daniel Isn’t Real Mortimer has crafted an exceptional psychological horror complete with cosmic dread and some effective body horror touches that might just get under your skin.