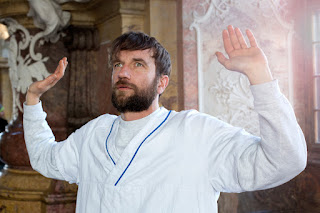 Not often do you get credits at the start of a short film but here you do and they’re beautifully understated, appearing as floating words in an elegant and unfussy typeface as the camera takes you along a light corridor, past a myriad of pale grey doors in the psychiatric hospital until it stops at one and the door opens to reveal a man lying on the floor with his arms stretched up towards the ceiling.

This man, we learn, is known as "Atlas" and everybody in the hospital - nurses, security guards, orderlies - has their own story about where he came from, who he was, what he did and what happened to put him into his catatonic state, standing always with his hands above his head. Tomasz Kot is perfectly cast as Atlas and his ability to not react to anyone or anything else going on around him for the majority of the film just adds to the voyeuristic feel of listening to others speculate and gossip about him, not caring whether he could hear them or not. Was he in Special Forces, captured in Iraq? Or maybe captured in a more compromising position with someone else's wife? Perhaps he was a hero in a mining disaster, holding the roof up so others in the mine could escape, or a missing astrophysicist who went mad after staring into too many black holes? Nobody knows but everyone thinks they do.

As well as the main story, there are some lovely, knowing, incidental touches to the film, like when the head psychologist complains that everyone has a nickname and is told his is “The Earl” while he stands in the same pose as a portrait of an Earl behind him. Or when the patients are doing art therapy in a beautiful open church-like space and one man is painting the face of Christ, looking the same as the botched Spanish Fresco that hit the news several years back. This adds to the richness and gentle humour that makes this film almost fairytale-like, in a similar vein to Tim Burton's Big Fish but without the darkness in tone. Nor a physical darkness, as the film is beautifully shot with a pastel colour palette and a wonderful use of natural light which, rather than being bleak and neutral, for me, adds a warmth to what could be thought of as a sterile and austere environment.

We as viewers do eventually find out the real reason that Atlas stands like that at the same time as everyone else in the hospital does and it makes for a beautifully ironic denouement to a wonderful little film written and directed by Maciej Kawalski. Watch the trailer below.