Short Film - The Girl with the Rivet Gun 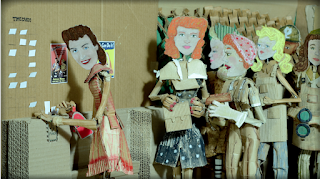 Susan Omand didn't get board as she watched The Girl with the Rivet Gun, a short film by Anne de Mare & Kirsten Kelly...

Do you know who Rosie the Riveter is? If not, you should do.

She featured on an American poster back in World War II, flexing her bicep and dressed in overalls and a red headscarf alongside the words WE CAN DO IT! With the majority of men away fighting, another workforce had to take up the slack in keeping the country’s factories running and the war machine fed with planes and ships, and the Rosie campaign was aimed at getting women into the workplace and doing much heavier factory jobs than they would have been used to, or even allowed to do, prior to the war.

This short film is a documentary about three such Rosies; Esther Horne, Susan Taylor King and Mildred Crow Sargent, who each tell some of their story of working in the wartime factories, from coming to terms with previous prejudices to fighting for their own equality.

The stories are cleverly presented, keeping the viewer engaged with a mix of live “talking heads” type interviews with the ladies and a very innovative animation style to illustrate the stories themselves of them working in the factories.

To be honest, I didn’t think I’d like the animation this time round because its perceived simplicity isn’t really my thing – it’s stop-motion, mostly using cut-outs made of corrugated card – but I couldn’t help but be utterly entranced by it. The level of detail was something I didn’t expect, from the intricate workings of the factory machines to the incredible facial portraits painted on the cardboard actors; as it swapped from interview to animation and back to interview, it was very easy to see who was meant to be whom and it made the whole thing flow together very well. Another thing that impressed me with the animation was that they made a thing about the medium, using rather than ignoring the characteristics of the cardboard, both in texture and malleability, to enhance the story telling, like having the corrugation visible on gearing belts round cogs, or making the backdrops look like the inside of cardboard boxes. And the third thing that I finally understood, from an artistic point of view, (you could hear the penny drop and the AHHHH noise I made as I finally got it) was the “why.” Why cardboard. What’s the most ubiquitous thing around any factory, no matter what they are making? Packaging. What was most, if not all, packaging made out of in the 1940’s? There, see? You’re making “ahhhh” noises too now aren’t you? It’s a subtle allusion but it’s a very clever one.

And that really goes for this film too - subtle but very clever. By not driving home (sic) the political and sociological themes in the narrative, but rather letting those that were there tell their own stories in their own gentle way, the film makes its points so much more eloquently and in a way that anybody watching would willingly take them on board rather than mentally shutting off, as is often the case with “anything educational.”

If you get the chance to see The Girl with the Rivet Gun please do take it. It’s… er… riveting. (Sorry, had to).