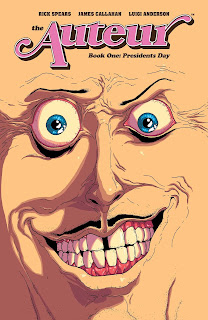 SHOWTIME has announced that it is developing and has ordered multiple scripts for a series based on the graphic novel The Auteur by Rick Spears, James Callahan and Luigi Anderson...

The half-hour episodes project, set to star Jude Law and directed by Taika Waititi, who will also write with Peter Warren (Ghost Team), will be produced by SHOWTIME and Legendary with Endeavor Content serving as studio.

Desperate to make a great horror movie after a massive bomb, a film producer accidentally traps his production on a backlot with a serial killer. THE AUTEUR is a gonzo horror-comedy, a twisted romance and a glamorous, high wire act of biting satire.

"The Auteur unites the wildly imaginative filmmaker Taika Waititi and the barbed wit of Peter Warren with the undeniable Jude Law in a bloody love letter to the movies that will make you simultaneously die laughing and want to run for your life," said Amy Israel, Showtime's Executive Vice President of Scripted Programming when she announced the project this week.

The Graphic Novel is still available if you want to get caught up with the story ahead of time.