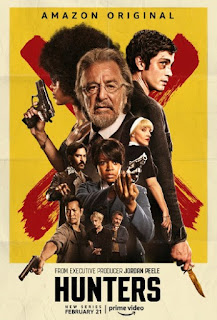 This team is more than meets the eye. Inspired by real events, watch the latest Red Band trailer for Hunters, which comes to Amazon Prime Video next Friday...

Inspired by true events, Hunters follows a diverse band of Nazi Hunters in 1977 New York City who discover that hundreds of escaped Nazis are living in America. And so, they do what any bad-ass vigilante squad would do: they set out on a bloody quest for revenge and justice. But they soon discover a far-reaching conspiracy and must race against time to thwart the Nazis’ new genocidal plans.

Oh, and a note from the guys at Amazon: WARNING: This red band trailer contains graphic violence and cursing from a rag-tag team of Nazi hunters exacting their bloody righteous revenge. Sooo definitely don’t watch this at your work desk.