Audio - Doctor Who Short Trips: Decline of the Ancient Mariner 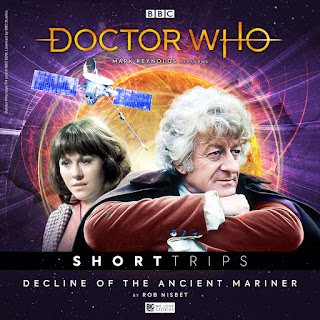 There's jeopardy in store for Sarah Jane Smith and the third Doctor in a new Short Trip from Big Finish, as they face the Decline of the Ancient Mariner...

Doctor Who – Short Trips are short stories, many written by some of Doctor Who’s most popular authors from the worlds of television, print, comics and audio, and read by a host of favourite Big Finish actors.

Fans of Samuel Taylor Coleridge will recognise the play on words in the latest Doctor Who – Short Trips adventure, Decline of the Ancient Mariner, released today. Performed by Mark Reynolds, this Third Doctor adventure is based on real life events from the era when Jon Pertwee and Elisabeth Sladen were still the incumbent stars of Doctor Who on television.

When NASA has a problem they can’t quite understand, they quickly turn to the Doctor and Sarah Jane Smith to investigate. Their Mariner 10 probe disappeared for 30 minutes, with no apparent explanation. What starts out as quick investigation ends up having catastrophic consequences for the time travellers.

But the reason for the probe’s disappearance sounds a little too familiar for the Doctor...

Writer, Rob Nisbet said “In March 1974 the U.S. spacecraft Mariner 10 flew past the planet Mercury, taking detailed photographs for the first time. When I researched the mission, I found that it was fraught with technical malfunctions. The guidance system relied on the position of the bright star Canopus, but at one point the star-tracker confused this with another light out in space.

“Hmmm... What was this other light? That set me thinking, and the story took shape: and now Sarah and the Doctor are off on another adventure!”

Producer Alfie Shaw added “Decline of the Ancient Mariner is a lovely tale from Rob Nisbet, who wrote the very popular A Heart on Both Sides a few years ago. It was a delight to work with Rob on this, reuniting the Third Doctor and Sarah Jane Smith on audio, to help solve a mystery based on real world events.

“With Mark Reynolds providing a new version of the Third Doctor for Big Finish, this little slice of the 1970s will end March on a high for listeners.”

Doctor Who – Short Trips: Decline of the Ancient Mariner is now available to download exclusively from www.bigfinish.com for just £2.99.

Big Finish listeners can save money with a bundle of the Short Trips range and get the 12 stories from series 10 for just £30 – that’s a whole year’s worth of adventures, including the already-released stories, The Infinite Today (read by Katy Manning), and Deleted Scenes (read by Frazer Hines).