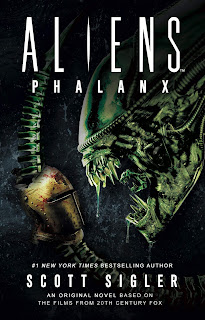 In space, no-one can hear you read? Alwyn Ash read Aliens: Phalanx by Scott Sigler, out now from Titan Books...

Beowulf meets sci-fi in a thrilling tale written by #1 New York Times best-selling author Scott Sigler, although replace Grendel with an Alien and you get the idea!

For the past few years we've been very lucky to have amazing titles published by Titan Books set in the Alien Universe; River of Pain and Alien: Isolation are two of my favourites. And in every one we are met by familiar characters, whether it be Colonial Marines or Colonists looking to build a better future for themselves. However, Sigler does something a little different with Alien: Phalanx: crafting a place that feels very real and horrifying, and yet bringing it all together in a way unlike any other title before it. Instead of pulse rifle and grenades, natives fight with spears. As it says in the synopsis: "Ataegina was an isolated world of medieval castles, varied cultures and conquests, vibrant until the demons rose and spread relentless destruction..."

It's a different take on the franchise, and you can just tell how much the author enjoys playing in his sandbox with this; the worldbuilding is magnificent, and each character really matters. It's a planet that has been torn apart by the "demons", the population decimated. Now survivors have adapted to this new world, relying on runners to carry supplies and news to the different shelters. Ahiliyah is one of these, a brilliant and strong young woman; brave, determined and wise. Alien gave us one of the first true heroines in film with the iconic Ellen Ripley, and thankfully Alien: Phalanx doesn't let us down. Ahiliyah is as every bit as courageous, fighting for what she believes in and protecting those she cares for.

If you're interested in ancient history, then you'll absolutely love this novel. Sigler certainly knows his stuff here. It's honestly quite refreshing, too, that there isn't a spaceship or Weyland-Yutani Corporation employee in sight. And just like in the game Alien: Isolation, survival on Ataegina is all about stealth and avoidance...

Phalanx doesn't hold back on the horror, either, which will be a relief to Alien fans. Those familiar with Scott Sigler's work will know that he also wrote the short story Dangerous Prey for the anthology Aliens: Bug Hunt, also published by Titan Books, so this new novel was always going to be in excellent hands.

At 512 pages in length, this is also one of the longest in the line of titles (Phalanx is the eighth) released by Titan so far, but it's easy to see why. Unlike other stories in the franchise in which people find themselves confronted by this terrible menace out of the blue, the people of Ataegina have lived with this threat, it's all they now know. Just imagine if Rebecca "Newt" Jorden and other children had survived the initial Alien onslaught on Acheron (LV-426 in Aliens) and grew up in that world, and eventually had children of their own; imagine if, in time, the Aliens simply became known as Demons, and a Humanoid society evolved alongside those very creatures...

Crafting something as special as Phalanx requires a lot of thought and research. Indeed, the Alien franchise is so large in scope that it's always important not to upset the apple cart by adding anything that will disrupt established continuity or make it difficult for future continuity. Sigler avoids this by writing a story that is self-contained, so it's very easy to latch on without prior knowledge of what's gone before in previous movies and books. In an interview with Youtube channel Alien Theory, the author points out that several ideas for a novel were considered before the final draft. Thankfully Sigler had the freedom to build his own society and let loose the Xenomorph.

I'm also fascinated by his opinion that the Aliens are not evil, they're simply creatures focused on survival of their species. We call them "monsters", but in reality they're far from it. I guess the same applies to most things, everything is from a certain point of view. In The Walking Dead television series I consider zombies as victims not monsters, they're far from being evil or the villains of the series. In both franchises, Humans act as a major threat to the safety of others. Think of Carter Burke in Aliens (1986), his deceit is more sinister and life threatening than the creatures that surround them. The enemy within. And the decision making of bureaucrats weighs heavy on the shoulders of characters we love, forcing them into situations that just should not be allowed.

Ironically, the Xenomorphs are better organised and connected, they work for the good of the Queen and their hive, and their race. If they could spell they'd say there's no "I" in "We".

In Aliens: Phalanx, there are the same frustrations and lack of unity, a feeling that characters deserve better if only their superiors would listen and allow them to be more ambitious in their future plans. If you're quick and strong, you become a runner, regardless of other abilities. And as we know, being a runner is the most dangerous job on Ataegina. So much potential is lost in a society that doesn't bend or think outside the box.

I do hope that Titan Books continues to be granted a licence to print further Alien titles, because I just can't imagine my life without them. Beyond the movies, they're a fantastic place to explore. And page turners like Phalanx are one reason why the Xenomorph continues to reign supreme in our own world.

Aliens: Phalanx by Scott Sigler is out now from Titan Books