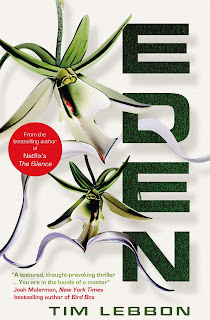 From the bestselling author of The Silence comes a brand-new, original eco-horror set in a near-future world in which self-preservation truly is the first law of nature. Coming next month from Titan Books is Eden by Tim Lebbon...

In a time when Earth’s rising oceans contain enormous islands of refuse, the Amazon rainforest is all-but destroyed, and countless species edge towards extinction, the Virgin Zones were established in an attempt to combat the change. Off-limits to humanity and given back to nature, these thirteen vast areas of land were intended to become the lungs of the world.

Dylan leads a clandestine team of adventurers into Eden, the oldest of the Zones. Attracted by the challenges and dangers posed by the primal lands, extreme competitors seek to cross them with a minimum of equipment, depending only on their raw skills and courage. Not all survive.

Also in Dylan’s team is his daughter Jenn, and she carries a secret – Kat, his wife who abandoned them both years ago, has entered Eden ahead of them. Jenn is determined to find her mother, but neither she nor the rest of their tight-knit team are prepared for what confronts them. Nature has returned to Eden in an elemental, primeval way. And here, nature is no longer humanity's friend.

Eden is a triumphant return to the genre by one of horror’s most exciting contemporary voices, as Tim Lebbon offers up a page-turning and adrenaline-fuelled race through the deadly world of Eden, poignantly balanced with observations on humanity’s relationship with nature, and each other. Timely and suspenseful, Eden will seed itself in the imagination of the reader and continue to bloom long after the last page.