Book - Love And Other Thought Experiments 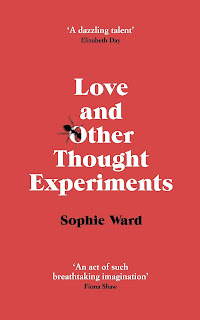 Marc Nash contemplates Love And Other Thought Experiments as he reads the book by Sophie Ward...

Yes, that Sophie Ward. Her out of “Heartbeat” and “Holby City” and with a smattering of film roles including the “Young Sherlock Holmes”. But don’t let that roster of popular cultural credits mislead you, this is one serious literary author (she obtained a joint degree in Literature and Philosophy from the Open University and puts it to good use here).

Every chapter is prefaced with a philosophical thought experiment, such as “Pascal’s Wager”, or “The Prisoner’s Dilemma”, through Thomas Nagel and John Searle, to more recent ones evolved from things thrown up by the development of AI and artificial consciousnesses. Sometimes when a device like this appears in books, it has very little justification and looks more like a bolt-on to show how clever or well-read the author is. Not in this case, the thought experiments are significant filters for the narrative story that follows within the chapter. For, as per the title, the book is an inquiry into the precise nature and limits of human consciousness; since, in order to give of yourself to your lover, you have to have an inkling of where your consciousness ends and theirs begins. Just how much of our consciousness is constructed for us by senses and what is he relationship of both to the “I” of the self?

The book opens with a lesbian couple, scientist and rationalist Eliza and her more homely partner Rachel. They are asleep in bed one night, when Rachel is jolted awake by the sensation that an ant has bitten her and then tipped into the jelly of her eye. This becomes a tipping point in their relationship and for the whole book’s structure. To demonstrate her true love for Rachel, she has to override her natural skepticism and allow the possibility that it could have happened. If she does that, then she also appreciates she has to go all in and commit to Rachel in every aspect of their relationship, where she has been holding herself back up until now. And that includes an unwillingness to commit to having a child together by IVF. That night is the making of their relationship; unfortunately they don’t realise that Rachel has a fatal tumour, that claims her life two years after their son Arthur’s birth. This opening chapter is so beautifully written, a tender portrait of a relationship and the compromises needed for two people to give themselves totally to each other and sets up everything that follows.

I’ll pass over chapters 2 and 3, because they are perhaps the least involving in the book, one centring on Rachel’s mother, retired with her artist husband to Brazil, he other being about a Turkish boy in Cyprus shortly before it became a divided militarised zone, who has a connection to both Rachel and her mother, but who only really remains as a shadowy presence throughout the book. The book really takes off in chapter 4, when we get the perspective of the ant who may or not really have entered through Rachel’s eye. What attracted it originally was the sweet smell of disease and once inside Rachel, it nibbles at the brain tumour for sustenance. In doing so, it begins to merge its consciousness with Rachel as it ingests the human concepts racing through her brain. In any other book, this would be anthropomorphism of the worst sort, but because it has been set up in the framework of questioning how much of an other (alien) consciousness we can ever know and inhabit, it utterly works in this context. Instead of us fixing on what it might be like to be an ant, here we get an ant’s take on what it might be like to be a human. A very important distinction.

Other chapters deal with AI and human created external consciousness, as the grown up Arthur becomes an astronaut, posted on a solo mission with only the guidance of his AI, when things take a strange turn. We’re in the territory of Clarke/Kubrick’s “Hal” here, but Ward wants to interrogate just how something programmed by man can break free of its inputs to develop its own logic and just how that relates back to us humans. We get chapters not of parallel universes, as much as alternate consciousness, as characters like Rachel seem to reappear back from the dead but they are different. So we have a final chapter titled simply “Love”, in which an altered Arthur may or may not be reunited with his ‘real’ dead mother, whose loss has shaped his whole life in his wish to be reunited with her.

The book works on both levels, the intellectual one of inquiring into the nature of consciousness, but also as a story about love. For me it was superior to Jessie Greengrass’ novel “Sight” which also mixed science with a love narrative, but with a far less seamless blending structure. The book also reminded me of Jaroslav Kalfar in dealing with similar themes and I loved that book too. Highly recommended.