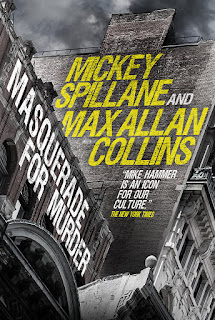 Discover a hardboiled noir mystery full of thrills and suspense, that keeps the spirit of Spillane’s iconic character alive.

After Mike Hammer witnesses Wall Street superstar Vincent Colby getting clipped by a speeding red Ferrari, the shaken victim’s stockbroker father hires Hammer to find the driver. But the toughest private eye of them all is soon is caught up in a series of bizarre, seemingly unconnected slayings marked by a forbidden martial arts technique.

What do a lovely redhead, a short-tempered bartender, an exotic call girl, a murdered police inspector and a movie stuntman have to do with a scheme that might have transformed young Colby into a psychological time bomb?

Mickey Spillane is the legendary crime writer credited with igniting the explosion of paperback publishing after World War II as a result of the unprecedented success of his Mike Hammer novels, feeding the public's appetite for sexy, violent, straight-talking crime stories. He also starred as Mike Hammer in The Girl Hunters. Mickey Spillane died at the age of 88 in 2006.

Max Allan Collins was hailed in 2004 by Publisher's Weekly as "a new breed of writer." A frequent Mystery Writers of America nominee in both fiction and non-fiction categories, he has earned an unprecedented eighteen Private Eye Writers of America nominations, winning for his Nathan Heller novels, True Detective (1983) and Stolen Away (1991). In 2002, his graphic novel Road to Perdition was adapted into an Academy-Award winning film, starring Tom Hanks, Paul Newman, Jude Law and Daniel Craig. He lives in Iowa, USA.

Masquerade for Murder is published on 7th April by Titan Books