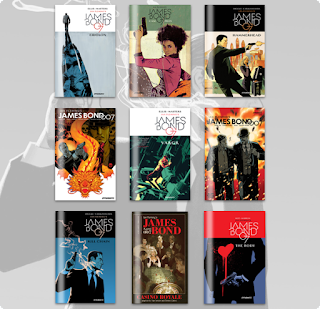 The name's Bundle. Humble Bundle. Yes, the wonderful charity supporters Humble Bundle have a Q's briefcase worth of James Bond comics from Dynamite Entertainment on offer for the next three weeks...

Launched yesterday, the Bundle is going to be available to buy on a "pay what you want" basis until Wednesday 15th April and, as with all Humble Bundle collections, the more you give, the more you get. 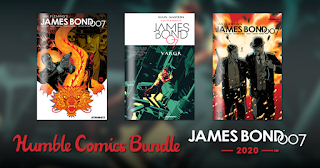 Here's what they're offering this time (minimum bundle price just £1):

Felix Leiter finds himself in Japan, tracking down a beautiful, Russian spy from his past. But when the mission takes a turn for the worse, he will discover that there are more deadly schemes afoot in Tokyo and beyond! From superstar creative team James Robinson (Starman, Red Sonja) and Aaron Campbell (The Shadow, Uncanny) comes the Bond spin-off highlighting 007's American counterpart, blending spy thrills with the dark alleys and darker deeds of crime fiction!

The ODD JOB epic begins in a new ongoing James Bond comic series by superstars GREG PAK (Planet Hulk, Mech Cadet Yu) and MARC LAMING (Star Wars, Wonder Woman)! Agent 007 tracks a smuggler into Singapore to secure a dangerous case, contents unknown. But a Korean mystery man wants the case as well, for very different reasons. And if Bond and this new rival don't kill each other, the ruthless terrorist organization known as ORU will be more than happy to finish the job!

At last, the definitive account of James Bond's exploits during World War II! MARCH, 1941: Seventeen-year-old James Bond is a restless student in Scotland, an orphan, eager to strike out and make his mark on the world. But a visit by an old family friend coincides with THE CLYDEBANK BLITZ, the most devastating German attack on Scotland during the War. James will fight through hell to survive, coming out the other side determined to make a difference. He'll find his calling in a new British government service, secret in nature...

After a mission of vengeance in Helsinki, James Bond returns to London and assumes the workload of a fallen 00 Section agent. His new mission takes him to Berlin, presumably to break up an agile drug-trafficking operation. But Bond has no idea of the forces gathered in secret against him, the full scope of an operation that's much scarier and more lethal than he could possibly imagine. Berlin is about to catch fire... and James Bond is trapped inside. Dynamite Entertainment proudly presents VARGR, the debut storyline in the all-new James Bond comic book series, as crafted by masterful writer Warren Ellis (Transmetropolitan, The Authority) and artist Jason Masters (Batman Incorporated, Guardians of the Galaxy). 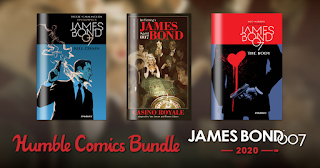 PAY £6 OR MORE TO ALSO UNLOCK!

Ian Fleming's literary debut of British Secret Service agent 007 is stylishly adapted to the sequential art medium by Van Jensen and Matt Southworth in the official James Bond: Casino Royale graphic novel. Sent to a French casino in Royale-les-Eaux, Bond aims to eliminate the threat of the deadly Le Chiffre by bankrupting the ruthless SMERSH operative at the baccarat table. However, when the luck of the draw favors his enemy, 007 becomes the target of assassins and torturers in a high-stakes game of cat-and-mouse.

New arc! New creative team! Perfect time to jump aboard one of the best-reviewed series of 2018-19!

As Bond undergoes a post-mission medical examination, he relays the story of his previous mission to the examiner. Each cut, bruise, and broken bone connected to a specific event of the mission. A connection is made between two people with different purposes: one to save lives, the other to take them. PART TWO - THE BRAIN James Bond leads the interrogation of a scientist who allowed a lethal virus to be stolen. But when the investigation takes a surprising turn, Bond begins to question whether he is enough. PART THREE - THE GUT One sauna. Twenty Neo-Nazis. One Bond. James Bond. This weapons deal won't go according to plan. PART FOUR - THE HEART On the run from a lethal antagonist, weaponless and wounded deep in the Highlands, Bond finds solace with a woman who exchanged her job as a doctor and a life in the city for a cottage and solitary life of a writer. Can Bond find a quiet peace unlike he has known before or will his life choices catch up with him? AND MORE… 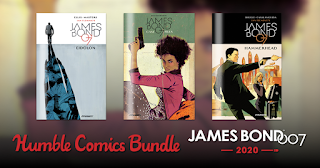 In this second adaptation of the Fleming novels… Bond is sent to New York City to investigate "Mr. Big", an agent of SMERSH and a criminal voodoo leader. With no time for superstition—and with the help of his colleague in the CIA, Felix Leiter, Bond tracks "Mr. Big" through the jazz joints of Harlem, to the everglades and on to the Caribbean, knowing that this criminal heavy hitter is a real threat. No-one, not even the mysterious Solitaire, can be sure how their battle of wills is going to end…

Contains Four exhilarating stand-alone Bond stories from superstar creators. SERVICE: In contemporary politics, where Britain's world standing is often more zero than 007, an assassin plans to exterminate the "special relationship," and lead Britain and the United States into a very dark place...especially when he does so by aiming down the sights of an ancient Enfield rifle! It'll test Bond's deadly talents to their limits, in order to defeat the assassin and avert certain geopolitical disaster… MONEYPENNY: Friend of JAMES BOND, former MI6 field agent and bodyguard of M! On a 'routine' protection mission, Moneypenny discovers a complicated assassination plot that bears a startling resemblance to a terrorist attack from her childhood. Can she call upon her secret agent skills to stop the plot...? SOLSTICE: 007 accepts an unofficial mission. He travels to Paris, in pursuit of a Russian. But is Bond the hunter, or the hunted? M: James Bond's superior, code-named M, scrambles MI6's secret agents across the globe. Sometimes, he knowingly sends them to their deaths, for the greater good. But a traumatic event from M's early days in the eld returns to haunt him, forcing M to return to the scene of a crime...HIS crime.

Bond is assigned to hunt down and eliminate Kraken, a radical anti-capitalist who has targeted Britain's newly-upgraded nuclear arsenal. But all is not as it seems. Hidden forces are plotting to rebuild the faded glory of the once-mighty British Empire, and retake by force what was consigned to history. 007 is a cog in their deadly machine - but is he an agent of change, or an agent of the status quo? Loyalties will be broken, allegiances challenged. But in an ever-changing world, there's one man you can rely on: Bond. James Bond.

When a counterespionage operation in Rotterdam goes catastrophically wrong, James Bond finds himself in the crosshairs of a plot to smash NATO. Someone is assassinating allied agents, and 007 is the next target in the kill chain. Having kept the peace for decades, the old alliance is collapsing, pitting MI6 against its former ally - the CIA! Dynamite Entertainment proudly presents the return of writer Andy Diggle (James Bond: Hammerhead, The Losers, Green Arrow: Year One) and artist Luca Casalanguida (James Bond: Hammerhead) as they plot the return of James Bond's oldest and deadliest foe: SMERSH!

"GOLDFINGER" A friendship is finished. The world is in peril. And Goldfinger wants diamonds. The modern Bond epic continues by GREG PAK (Planet Hulk, Firefly) and ERIC GAPSTUR (Batman Beyond, The Flash: Season Zero).

Find out more about all of the titles, read short previews of each, and pick up your bundle by visiting the Humble Bundle website HERE.