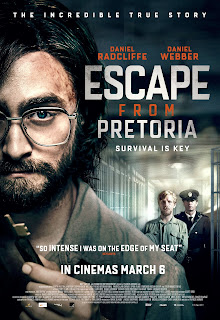 With the film coming to Amazon Prime from Friday, a reminder of Steve Taylor-Bryant's thoughts on Escape From Pretoria ...


Based on the book by Tim Jenkin, one of the main protagonists in the film, writer and director Francis Annan brings to the screen the true story of two white South African men, Tim (Daniel Radcliffe) and Stephen Lee (Daniel Webber) who are imprisoned for terrorist atrocities linked to the ANC during 1970’s Apartheid. Their crime? Setting off explosives that fired leaflets into the crowds with such horrific statements on them as “all people are equal”. A brief reminder to those who don’t know about or have never heard about Apartheid is given at the start of the film but basically think of it as government authorised psychotic racism and you won’t be far off. The two men are sentenced to 12 and 8 years respectively and sent to Pretoria's White’s Only Prison. Only they do not intend to stay and, over the course of about 18 months, put a plan in place to escape the prison by making keys and walking right out of the front door.

Prison movies are great and I love most of them. The ones based on true life tend to be the best as the audacious ways the escapes are planned tend to be way beyond any fiction and, if you leave the social commentary to one side just for a moment, what you have here is a stunning prison escape film up there with Escape From Alcatraz. It is ingenious in its plotting, flawless in its execution, and tense as all hell, helped along in that regard with a subtle yet effective score from David Hirschfelder. The scenes throughout the 400 odd days of planning are all incredibly well acted, nearly all of it done with facial or physical ticks as there is not a lot of dialogue involved in sneaking around a prison at night when you are supposed to be in your cell. As a prison film, an escape movie, it is nigh on perfect and just on that level it works really well. 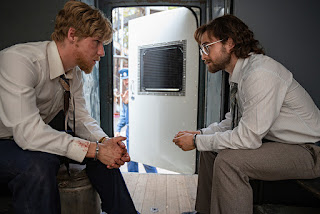 But it is when you stop to consider what it was these men were fighting in the first place, and that this is a true story (I believe the addition to the escape of Leonard played by Mark Leonard Winter is fictionalised,) and realise that it shows you a world from not that long ago and one I fear we are heading towards again, that it ramps up a whole new level. You always want your hero to escape and your prison guards to be baddies; when men like Tim Jenkin and Stephen Lee are the heroes, men who sided with people of a different colour because it was the right thing to do and were brutally punished for it, you want them to escape that little bit more, you care about the outcome that little bit more, and the racist pigs that were the guards? Well, you relish their discomfort when the plan works a whole hell of a lot more.


I have always liked Daniel Radcliffe. He never allowed himself to be pigeonholed after his early franchise success as a boy wizard and I have marvelled at some of the brave career choices he has made since Harry Potter ended. I don’t think I have ever believed him more, though, than I believed his portrayal of Tim Jenkin though, Radcliffe was, in my opinion, playing out a career best role in a career filled with great parts. Daniel Webber, I knew from The Dirt, the Netflix Motley Crue movie and his portrayal of Stephen Lee is certainly more subtle than his Vince Neill was, but he is the perfect foil for Radcliffe’s Jenkins. Mark Leonard Winter played Leonard like a desperate father who fears he will lose his young son and was the character that made me the most tense throughout my viewing as Jenkins and Lee went about their work with assured intelligence whilst Leonard was running on desperation and his character is probably the one I am most relieved for upon the escape. With solid appearances by Ian Hart, another Potter star, as Denis Goldberg and Nathan Page as Mongo the casting is superb from top to bottom.

Fantastic writing on an important slice of history matched only by the casting, score, and cinematography, Escape From Pretoria is the next film on your ‘To Watch’ list. If it's not it should be.