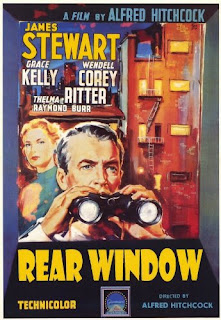 Ren Zelen looks back at some of the films that made her fall in love with cinema in the first place with The Films That Made Me. This time she re-views Rear Window...

Rear Window was the movie that introduced the young Ren to the perverse genius of Alfred Hitchcock. I remember as a child, being irresistibly drawn into the voyeuristic position of his protagonist and fascinated by the goings-on in the windows he was observing.

At that early time in my life I didn’t understand what this odd attraction was, but with maturity and after many subsequent viewings of this movie and of his other work, I have a better appreciation of what Hitchcock usually tries to conjure up, and Rear Window remains one of my favourites in his oeuvre.

Hitchcock claimed not to care about the subject, morality or message in his movies, but only about the manner in which his stories were told, but his attraction to the psychological was one of his most obvious storytelling strengths.

Several archetypal situations repeat themselves in his films: one of them is a fascination with voyeurism - of watching people who do not know they are being watched. If Hitchcock made a career out of indulging our voyeuristic tendencies, he never excited them more skilfully, or with more gleeful self-awareness, than in Rear Window.

The film concerns the predicament of L.B. Jeffries (James Stewart) a photojournalist laid up with a broken leg during a hot city summer and confined to his tiny courtyard apartment. To pass the time between visits from his canny nurse (Thelma Ritter) and his fashion-model girlfriend Lisa (Grace Kelly) Jeffries indulges his photo-journalistic inclinations by staring through binoculars and tellingly, using his camera lens to zoom through the windows into the other apartments around his courtyard, secretly observing the various activities of his neighbours.

As he watches their lives unfold, he fancifully assigns them roles and characters, such as "Miss Torso" - a pretty professional dancer with an active social life or "Miss Lonelyhearts" - a middle -aged woman who fantasises about entertaining non-existent gentlemen callers. His observations engender personal stories that he (and we) can relate to. 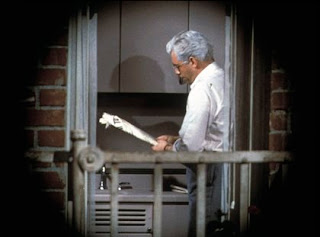 One of Jeffries’ subjects is the seemingly mild-mannered travelling salesman Lars Thorwald (Raymond Burr), who is living with a demanding, invalided wife. One afternoon, Thorwald pulls down his window shade – then his wife's incessant taunts come to a sudden halt.

Mostly out of boredom, Jeffries casually concocts a scenario in which Thorwald has murdered his wife and disposed of her body in a gruesome fashion. However, as he continues to observe Thorwald, Jeffries begins to suspect that his idle musings might have actually hit upon the truth.

Essentially, Rear Window is a film about a man who does on the screen what we do in the audience - look through a lens at the private lives of strangers. Jeffries is trapped in his wheelchair and we're trapped with him. We are confined inside his point of view, inside his lack of freedom and within his limited options. When he passes his long days and nights by maintaining a secret watch on his neighbours, we shamelessly share his obsession. As he sits in his wheelchair holding a camera with a telephoto lens, he looks first here, then pans over there, just like a movie camera. What he sees, we see, what conclusions he draws, we draw.

All wordlessly, because both Jeffries and we are watching a series of silent scenarios (there is often no musical soundtrack, only the ordinary sounds of the city). But this is a Hitchcock film, so these 'silent' images begin to create a montage of unease and suspicion. What is extraordinary for a film that works on this level is that it also manages to be a riveting thriller. 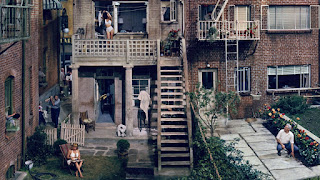 The murder scene (which one can appreciate best on a second viewing) is a masterpiece of suggestion and ellipsis. In contrast to the more overt killings in Hitchcock's Psycho six years later, this murder happens out of sight, behind lowered blinds. The scream goes unnoticed in the big-city night and in the aftermath not a drop of blood is seen. The rain falls, Thorwald wanders in and out of his apartment carrying his large salesman's suitcase and we are only left to imagine what it might now contain.

Themes of relationships, romance and marriage - those that work and those that don't, are an additional thread throughout the movie. Jeffries watches as the newlyweds across the courtyard draw the blinds, the young husband occasionally opening the window to catch his breath. He sees long-married couples arrange their sleeping habits on a hot night. The pretty dancer manages several suitors while the sad, lonely woman struggles to find companionship and affection (a bit of snooping that finally causes Jeffries to feel shame at his peeping.)

Jeffries and Lisa quarrel over his reluctance to marry her and settle down. Their relationship was of interest to me as a young girl as initially, one might find it difficult to understand how any man could resist the lure of Grace Kelly, more so as she appears to be so glamourous and attentive. However, it is slowly revealed that although she is physically gorgeous, Jeffries doesn’t really find her interesting. He finds her beauty and her work superficial and meaningless. It is only when she becomes an active participant in the proceedings and proves herself to have more complexity and initiative than he ever imagined, that he begins to respond to her.

By the end of the film, she has discarded her Paris gowns and is curled up on his sofa in jeans and a loose shirt. This appears to indicate that it isn’t enough to be a lovely fashion-plate, a girl needs to have character!

Rear Window is an idea which could only have been played out in a crowded urban environment. What it has to say about human nature is fairly superficial, but it does expose many facets of the alienation of city life and our impulse of morbid curiosity. Here we have the frisson of the forbidden, the promise of the sensational, but alongside it is the risk of the unexpected menace - of secrets we would rather not know.

Cinema, first and foremost, is a visual medium, a form of voyeurism, where we can guiltlessly sit and watch the private lives of other people with impunity, even in their most intimate moments. For the reader, literature allows scope for the imagination, novels can elucidate every thought and feeling of a character, but film cannot - it defines its action through the visual image. Having only the visual to refer to, there is always is some 'guesswork ' involved. It's wrong, we know, to spy on others, but we are happy to be brazen voyeurs when we go to the movies.