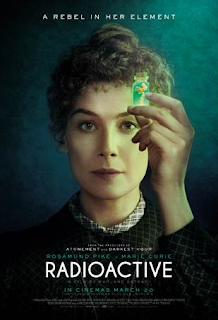 Without the need for a Geiger counter, Ren Zelen watched the Marie Curie biopic Radioactive...

It’s about time that Marie Curie received an updated biopic. Consistently voted the most influential woman in science, the Polish physicist was the first woman to win the Nobel Prize, and the first person ever to win two.

Director of Radioactive Marjane Satrapi, begins her biopic with Marie Curie (Rosamund Pike) close to death in a Paris hospital in 1934, reflecting on what her discoveries have entailed. She recalls a time in Paris in 1895 where, as Polish immigrant, Maria Skłodowska, she struggled to gain the resources she needed to move forward with her scientific observations.

It’s made clear that her difficulties are partly due to the fact that she is underrated as a female scientist, but also due to her brusque and unaccommodating personality when it comes to pursuing her work.

A chance meeting with fellow physicist Pierre Curie (Sam Riley) leads to a shared laboratory, a fruitful professional collaboration and the subsequent discovery of Radium and Polonium (which she named for her home country). It also leads to a burgeoning romance.

When widespread acclaim and the Nobel prize follow, Pierre travels to Stockholm to accept the award which has been cited in his name only, but which he insists on accepting on behalf of his wife Marie Curie also. In his acceptance speech he declares his hope that, “Mankind will derive more good than harm from the new discoveries,” (he was clearly aware of the nefarious uses of Nobel’s own contributions).

Nevertheless, when Pierre returns home Marie and he have a bitter argument. She has been left behind recovering from a recent childbirth and feels overlooked and unappreciated for her contribution to science. Ultimately, she admits that her anger isn’t really directed at Pierre but at a society which ignores women, even those who are as vocal and confident in their own abilities as she is. 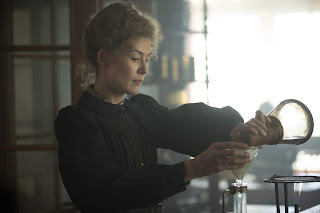 At first, Marie and Pierre are unaware of the dangers of Radium. Marie is so delighted with its luminous light she falls asleep every night with a small vial glowing green beside her. Radium and radioactivity become the rage of the age and are incorporated into a range of commercial products - radioactive toothpaste, radioactive chocolates, radioactive cigarettes and, hideous to contemplate, radioactive face powder (presumably intended to give the user a ‘glowing’ complexion).

It takes some time to realize the risks of an element that can both appear to cure cancer and then also to cause it. It is when Radioactive begins to grapple with the many repercussions of opening the pandora’s box of radioactivity that Satrapi, (acclaimed for her animated version of her graphic novel Persepolis), begins to veer away from the tropes of conventional biopics.

In an effort to convey the ramifications of Curie’s discovery, Satrapi folds together a century of constructive innovations, such as the discovery of the x-ray and of radiotherapy, with the destructive consequences, such as the tragic bombing of Hiroshima and the meltdown of the reactor at Chernobyl. The hopes that Pierre Curie expressed in his Nobel Prize speech are tragically contrasted with the dangerous misuse of radioactivity, even though it is made clear that Marie and Pierre had little understanding of the perils of unleashing an unstable atomic nucleus upon the world.

Satrapi has based her biopic on the graphic novel by Lauren Redniss and it is possible that these kinds of jumps back and forth in the timeline may have worked better on the page than on film. Here they interject heavy-handed didactic commentary and create jolts in the narrative flow.

In addition, Jack Thorne’s oddly unnatural script means that characters often speak as if to announce the film’s themes and their own personal place in the history books. Radioactive chooses to focus on Marie’s relationship with Pierre and offers a poor explanation of the science. The screenplay transforms a fiercely self-confident woman into a lovelorn, co-dependent, grieving figure, and undervalues the scientist who was renowned for fearlessly defying social and scientific boundaries.

The reason the film remains buoyant is thanks to excellent performances, particularly from Sam Riley and Rosamund Pike who go along with Satrapi’s efforts to make science sexy. Riley gives a quietly sympathetic performance as a man ahead of his time in accepting a headstrong woman as an equal and having the insight to appreciate her genius.

Credit too goes to Rosamund Pike for humanizing the problematic and not obviously likeable character of Marie Curie. She manages to engage our sympathy for the woman – her single-minded dedication to her work, her struggles for acceptance, her firmness in the face of chauvinism and xenophobia, and her grief at the tragic loss of her husband.

Cinematographer Anthony Dod Mantle creates a naturalistically wintry, muddy and dark, turn-of-the-century Paris, but augments this with a painterly sensibility which complements a score by composers Evgueni Galperine and Sacha Galperine.

The female scientists who were inspired by Marie Curie’s achievements have often toiled in obscurity, including her own daughter, Irene Joliet-Curie (played here by Indica Watson and Anya Taylor-Joy), who, just before her mother’s death, herself won a Nobel prize for developing artificial forms of radioactivity. Gifting and cursing the world with the discovery of radiation, the Curies were a short-lived family. Visitors who might like to see Marie’s original laboratory notebooks and equipment need to wear protective clothing, as they continue to radiate dangerous levels of radioactivity.

Radioactive opens the Kinoteka Polish Film Festival this year on 19th March. Find out more about the festival and book tickets here.