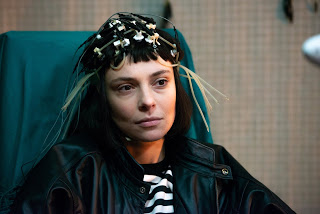 On at the Made in Italy film festival in London on 9th March, Tony Cross watched Simple Women...


Simple Women is the feature length debut of director Chiara Malta. It’s the story of a film. And of a life. Frederica (Jasmine Trinca) is an epileptic film director. The film begins with her first epileptic fit, at Christmas whilst watching the execution of Nicolae Ceaușescu. It then jumps to her teenage self. There’s a film, Simple Men. Directed by Hal Hartley and featuring Elina Löwensohn as Elina. Elina’s character is epileptic. Cut to the present day and Frederica, who is now working on documentary films for the Vatican bumps into Elina Löwensohn in the street. After discovering Elina is from Romania originally Frederica wants to make a film about Elina’s life in Bucharest. After some uncertainty Elina agrees and the rest of the film is the story of that film and the relationship between the two women.

The actual film, as opposed to the film within the film, began when Chiara Malta discovered that Elina Löwensohn wasn’t an American actress when they met in real life. This fact is important because this film plays many tricks with time and place. Elina Löwensohn is a real actress. She is in Simple Men. She’s brilliant in this playing a hyper-real version of herself. How much of the stories of her childhood are true in real life as opposed to true in film life I don’t know but Löwensohn is great.

As in Jasmine Trinca whose dream seems to be coming apart as Löwensohn turns out not to quite be who she wanted her to be and the process of making the film is more of a struggle than she anticipates, with people whispering behind her back and things going wrong – including breaking mirrors and gypsy fortune tellers.

The problem is that I didn’t really enjoy it a huge amount. I could admire the craftsmanship, the performances and the cleverness but I couldn’t quite let myself in. There’s a scene towards the end of the film where Frederica is trapped inside a building and can’t get out. She’s supposed to have the keys and she doesn’t. No one else has any. She’s standing there pushing at two great glass doors but can’t get out, which I suspect is a metaphor for her whole experience making the film. That is how I felt watching this. I didn’t quite have the key to unlock it or a fire extinguisher to smash through. I was on the wrong side of a glass door looking out. I could see it, but I couldn’t feel it.

And the problem is I really wanted to unlock that door because I suspect if I did there’s something marvellous on the other side. Whatever it was – or is – that was preventing me from doing so though means I can’t love this film. Perhaps Chiara Malta was trying too hard, but that’s no crime. In a world of super-safe blockbusters there’s room for experiment. Perhaps I wasn’t in the right place. Sometimes it’s me that’s the problem. Not everything is made for me to enjoy.

I’d like to see this again though. On a big screen. Where I can focus try again to unlock it. I recommend you see it for yourselves because I suspect for the right person this film will be one of those films that becomes formative. Like Simple men was for Frederica (and for Chiara Malta I suspect.) It’s not a film I want to give up on, which makes it more of a success than perhaps this review makes it sound. Especially as the two main performances are so good.

SIMPLE WOMEN with Intro and Q&A with Chiara Malta (director) is on 9th March at 6:30 pm at Ciné Lumière in London


Find out more about the film festival and book tickets

Image - Cinema Made in Italy Film Festival
Email ThisBlogThis!Share to TwitterShare to Facebook