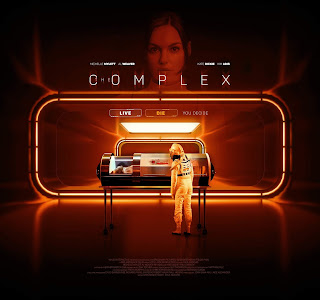 Billed as "Black Mirror’s Bandersnatch but by the Emmy award-winning writing team of The Handmaid’s Tale" the interactive film The Complex is released next week...

Following Black Mirror’s ‘Bandersnatch’ and the BAFTA-winning game Late Shift, The Complex is written by Lynn Renee Maxcy, part of the Emmy award-winning writing team from The Handmaid’s Tale and is the very first live interactive Science Fiction film, one of only a small number of interactive films in existence.

After a major bio-weapon attack on London, two scientists find themselves in a locked-down laboratory with time, and air, running out. With choose-your-own-adventure style gameplay, your actions and your relationship with other characters will lead you to one of eight suspenseful endings.

Having treated the victims of a chemical attack in the totalitarian state of Kindar, Dr Amy Tenant (Michelle Mylett) is a leader in the advancement of Nanocell Technology. Now, in London, news breaks of a blood-vomiting civilian whose identity is far from coincidental. Reunited with an old friend, Amy is trapped in an impenetrable HQ of laboratories—a womb of scientific advancement with a perilous secret. 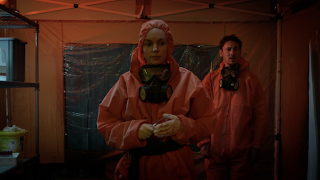 The interactive film is highly unique in that it offers multi-optional storytelling with 8 different outcomes; a real-time Relationship Status Tracking that influences the story as you play and a real-time Personality Trait Tracking that evolves based on your choices.

Throughout the game you will interact with characters and — depending on your choices — will either strengthen or weaken your relationship. The relationship scores are calculated from the start right through to the very end and will affect certain scenarios as well as having major consequences in the concluding scenes.

For every decision you make, every interaction, your character’s personality is being tracked. At the end of each playthrough, you are rewarded with a Personality Score and a breakdown to see how you played the game. Discover the five basic dimensions of a personality; openness, conscientiousness, extraversion, agreeableness and neuroticism. Which of those will your character play?

· Multi-optional storytelling with 8 different outcomes.
· Real-time Relationship Status Tracking that influences the story as you play.
· Real-time Personality Trait Tracking that evolves based on your choices.
· Unlockable features include Skip Scene, Personality Assessment and a Hidden Event.
· Featuring a Pause Choices option for improved audience participation during live streams.

Dr David Banner MBE, Executive Producer/Co-Founder, Wales Interactive, said “Wales Interactive is proud to be collaborating with an array of talent in both the film and the video game industry. The Complex is unlike any other interactive movie, with character relationship and personality tracking a key feature that will influence the future of interactive films. We’re very excited for both the digital and physical release on PC, PS4, Xbox One and Nintendo Switch."

Richard Pring, Executive Producer/Co-Founder, Wales Interactive, added “We are very excited to be at the forefront of the renaissance in interactive movies, bringing both high-end value in production quality and great advancements in technology. The Complex is one of the first in a new slate of titles using our streamlined Interactive Scripting Tool – WIST – that enables writers to easily create playable, multi-directional choose-your-own-adventure scripts.”

The Complex was developed and produced by John Giwa-Amu on behalf of Red & Black Films and Jade Alexander of Little Jade Productions in association with Brockway Pictures Limited, Great Point Media and Good Gate Media. The multi award-winning video games company Wales Interactive was the technology developer and publisher of the interactive film. Financiers are Wales Interactive and Fields Park.

Paul Higgins of Fields Park Media and Dragon Digital added “We are excited to be supporting this groundbreaking interactive drama. We believe it will be a major growth area of media going forward where games overlap with linear drama content. You could say we have got the bug!”

THE COMPLEX, a live action, interactive Sci-Fi thriller is released worldwide through PC, PS4, Xbox One and Nintendo Switch on 31st March 2020