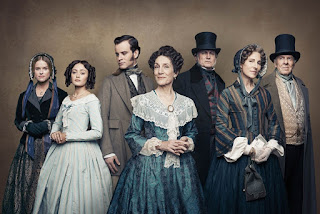 Ahead of Sunday's first episode of Belgravia, from the award-winning creative team behind Downton Abbey, ITV have released an interview with its writer Julian Fellowes...

Belgravia is a story of secrets and scandals amongst the upper echelons of London society in the 19th Century.

At the now legendary Duchess of Richmond’s ball on the eve of the Battle of Waterloo, young lovers Sophia Trenchard and Edmund Bellasis forge an ill-fated legacy that will create scandal for generations to come. Some years later when Sophia’s parents, the upwardly mobile Trenchards, move to the fashionable Belgravia, they find themselves rubbing shoulders with the venerated Brockenhursts. The two families share a history that threatens the inheritance and reputation of many.

There are those who would prefer the secrets of the past to remain forgotten, but as long-buried events resurface the truth behind the families’ connection becomes hard to conceal from the great and the good of British society. Soon an expectant heir, beleaguered household staff and avaricious adulterers conspire together to reap the benefits of this familial scandal. Prejudice and potential ruin must be overcome, and faced head on, if these family dynasties are to remain secured.

The first episode of Belgravia is on ITV this Sunday, March 15th, from 9 pm.

Here is the interview with writer Julian Fellowes.

Q: Tell us about the genesis of Belgravia.

A: Orion [the book's publisher] had had success with earlier novels by me and they wanted another one, so I was invited to a meeting with them, and we tossed around various suggestions. We had the idea of the double timeframe and it seemed interesting to start with the Duchess of Richmond's ball on the eve of Battle of Waterloo. I'd long been interested in that, particularly since I adapted Vanity Fair.

Q: Why was that so significant?

A: The ball was an extraordinary acme for a certain kind of tragic privilege. Uniquely entitled young men with their nice fiancées, wives and sisters were dancing at the Duchess's ball. They then left the dance floor to go straight to the battlefield. Many of the details fascinated me. As the men left and the women were weeping, some people carried on dancing. Some of the young officers were still in their dress coats when they died at Waterloo two days later. There's something about that image that is both glamorous and incredibly sad.

Q: What did that backdrop afford you?

A: I wanted to focus on a cross-class relationship and one of the things about warfare and living away from London is that normal social rules are suspended. It is said to be much easier to cut through the barriers of society during a war than at any other time.

The other thing that interested me is the concept of Belgravia itself. It's unusual in London because it doesn't overlay any buildings from a more ancient time. It was conceived as a whole, built on marshy fields and executed as a total design concept. That gives it a uniformity that few other places in London can match.

Q: What was behind the growth of Belgravia?

A: It was born of the prosperity that came at the end of the Napoleonic Wars. Industry and trading shot up. They generated enormous fortunes for individuals, and it became clear that Mayfair was no longer big enough to accommodate everyone smart. The Marquess of Westminster, or his advisors, realised this and they approached the brilliant Cubitt Brothers, who understood at once that the proposed site on the edge of London was perfectly placed for a new development. 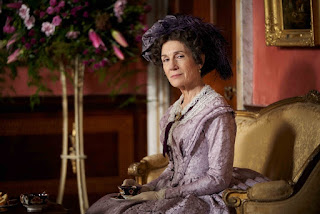 Q: What is at the heart of the story?

A: It's about two very different women, played marvellously by Tamsin Greig and Harriet Walter. I thought, "What can they have in common? How can I make it believable that they have a relationship?”, and it occurred to me that if they have a joint grandchild, that would make for a relationship they couldn't escape from. The story is based on secrets. The audience needs to be constantly surprised. If there are no surprises, then a drama lacks energy.

Q: How did you find the process of adapting your own novel for the screen?

A: I've never adapted one of my own novels before, although I have adapted other people's. As an adapter you think differently from a novelist. You can't allow characters to talk for as long on film as they do in a novel. You have to limit that. But I’ve worked so much in film and television that I have a visual concept of telling a story. As I'm writing, I'm seeing the film in my head. Quite a lot of Belgravia slipped into a series format easily. It was already half way there.

Q: What more can you tell us about the adaptation process?

A: I was also spoiled because the novel is not very long, and I was given six hours of screen time. If it were a film, I would have only had two hours, so I would have needed to lose an enormous amount of the narrative. But here I could tell the whole story, which was a luxury.

Q: Why does this setting work so well for drama?

A: Because it was a period of great change. There was enormous prosperity thanks to the boom after the fall of Napoleon, but it was also a period which indicated that Victoria's reign was going to be marked by innovation and invention. She came to the throne in 1837, when Britain was still lodged in 18th-century values, and by the time of her death in 1901, the modern world had arrived. I'm always interested in change and particularly in how supposedly immovable institutions alter and develop.

Q: What was driving this change?

A: Commerce is always a major ringmaster behind social evolution. Also, people were no longer prepared to leave decisions to an emperor who lived in a palace and told them what to do. Absolute monarchs were no longer what people wanted, although you see that more in upheavals abroad than anything Britain ever went through. Britain had overcome absolutism long before then. We already had an answerable parliament. We were ahead of our time, really.

Q: Can you elaborate on that?

A: Belgravia was a manifestation of prosperity, but it wasn't just the upper classes who lived there. The aristocracy were no longer automatically in charge. They had to accommodate their neighbours, as we must all do. If we live long enough, the world changes considerably and we just have to deal with it. That's a lesson we are all obliged to learn sooner or later. 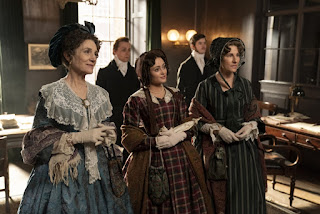 Q: How did you go about casting Tamsin and Harriet?

A: They were both top of our list to play Anne and Lady Brockenhurst. Very happily, they both decided they wanted to do it. It was lucky that they liked it and were available. They have different qualities but contrasted very well with each other. Tamsin has this unveiled truthfulness, whereas Harriet is more of a natural intriguer. They work very well together. They are perfectly cast.

Q: How would you describe Anne?

A: Anne is the moral tentpole of the story. She is not an extremist or a snob. She doesn't mind being married to a successful man, but doesn't give it any more value than it deserves. Her only weakness is her love for her daughter. She is the most morally upright character in the story.

Q: What about Lady Brockenhurst?

A: She is much more of a pragmatist. She is capable of compromise, but only when it's forced upon her.

Q: What does Philip Glenister bring to the role of James?

A: I was thrilled with Philip. James was the hardest role to cast in a way because he is a snob and a social climber and quite petty, but also fundamentally sympathetic. He is a very hard worker, but more than that you have to like him for the story to work. That's quite a difficult challenge for an actor, but Philip manages it completely. He remains likeable, even when James is at his most idiotic. Watching the actors bring my writing to life is the greatest thrill of all.

Q: Why are you so fascinated by the past?

A: The past has always fascinated me, even as a child. I was very lucky to get interested while my great aunts were still alive. When I was 15, I was able to talk to my Great Aunt Isie, who was born in 1880. She was presented to Queen Victoria. That was really interesting to me. I was talking to someone who was effectively from another planet. Later in life, I benefited as a writer from her teachings because she was 10 years older than Mary Crawley in Downton Abbey.

Q: Why do modern audiences connect so well with period dramas?

A: Period dramas have to tell us about ourselves to catch on. There is something quite interesting when you demonstrate that human nature doesn't alter. Crinolines and carriages may change but audiences see people with impulses they recognise, making choices they would make. The fact that those characters are in a top hat or a tiara doesn't make any difference.

Q: Do you think people might make comparisons between Belgravia and Downton Abbey?

A: People are entitled to compare the two. They're not very similar. They are set in very different periods, for a start, but they have some elements in common. For instance, if you were a strong and ambitious woman in 1840 or 1912, you had to find different routes around the rules. You had to be creative if you wanted to stay inside society while achieving what you wanted.

Q: What do you hope that viewers take away from Belgravia?

A: I will be very happy if people enjoy it. But if every now and then something in the story prompts an extra thought on the way into work, that would be great too.

Belgravia is a Carnival Films co-production with EPIX for ITV and is distributed by NBCUniversal International Distribution. The series has been commissioned for ITV by Head of Drama, Polly Hill. The eponymous novel on which it is based is published by Orion Publishing.

The first episode of Belgravia is on ITV this Sunday, March 15th, from 9 pm.