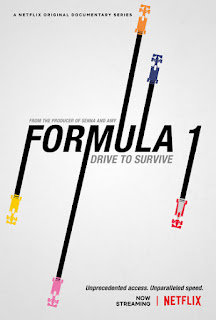 So, the world is in chaos and the effect of Covid-19 is being felt in all walks of society. I myself cannot visit with my parents who are in their seventies and I am a supermarket employee having to deal with a relentless onslaught of people on a daily basis just looking for food and toiletries which, in turn, puts me in a crowd of people daily so I dare not risk going anywhere other than work or home. Normally, if I am stuck at home, I watch sport but worldwide cancellations within all sports leaves very little to enjoy. In a desperate search for a sporting hit, I turned to the Netflix documentary series about Formula 1. I have been a lifelong fan of all forms of motorsport and rallying and Formula 1 in particular but coverage nowadays is so good I didn’t think a streaming service look at the 2018 season would offer anything in the way of entertainment or things I didn't already know. Man, was I wrong!

With Ferrari and Mercedes refusing to take part in the show's first season, the stories each episode come from lower in the league of teams and that adds a fascinating edge to proceedings and gives some insights into the teams and drivers not normally sexy enough for full coverage from sports networks. Concentrating in the early episodes on Daniel Riccardo, then of Red Bull, in his final season under contract to that team, and his relationship with up and coming maverick Max Verstappen was always going to be thrilling, but seeing Daniel making career decisions live on camera whilst Christian Horner, their team principal compared his drivers to his wife Geri Spice Girl’s donkeys added some much needed intrigue to my day.

I found during that particular season that Haas Racing supremo Guenther Steiner was a line toeing, say the right thing, company man and during the season's coverage I didn’t really give Haas much of a look in but, when you watch this show and see what a character he is when Sky etc aren’t looking, it's almost worth your Netflix subscription price. He swears like I do, which is a lot, and his quotes are cutting and it's this honest appraisal and forthright delivery that maybe the sport needs more of publicly. Telling his driver Romain Grosjean’s engineer to get on the radio and tell the driver to “focus on driving and not fucking whinge” and after losing both cars in the season opener to pit lane errors hes on the phone to team owner Gene Haas “We could have been rock stars but now we look like a fucking bunch of wankers, a bunch of fucking clowns,” whilst probably harsh in a professional environment, came across as very human reactions, he was speaking as a fan as well as a team boss and I applaud him for allowing this side of himself to be shown to the world.

My favourite parts though involved my all time favourite team and my current favourite drivers as the battle to the best Spanish driver saw my beloved McLaren, a team in transition, and uber cool ex-world champion Fernando Alonso come up against a resurgent Renault team and son of my favourite rally driver, Carlos Sainz Jr.

If you occasionally dip in and out of Formula 1 then there is a lot for you to discover in Drive to Survive, if you are an aficionado then there is mainly only blistering entertainment from your favourite drivers to watch, and if you are new to motorsport then you can marvel at the excellent production quality and action shots whilst maybe learning enough to enjoy the new season when and if it starts.

Stay safe and wash your hands.